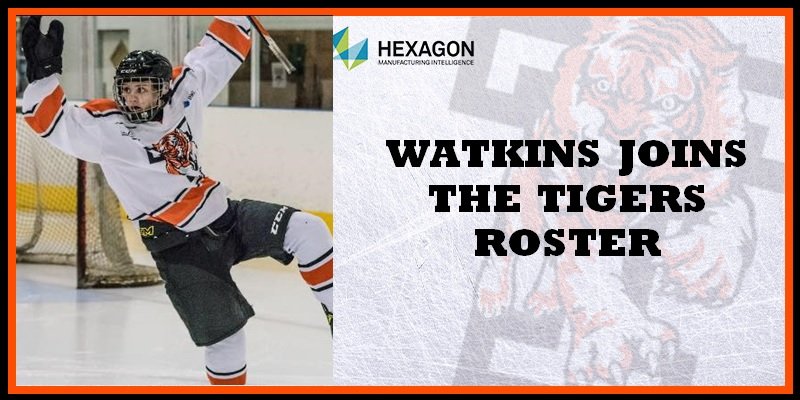 The Hexagon Telford Tigers can confirm that #25 Sam Watkins Joins the Tigers club Roster with immediate effect. Sam a product of the Telford Junior system will join up with both the T1 & T2 senior teams as well as continuing to ice for the Telford U18’s.

Sam was a key member of the Tigers Under 18’s team that won the National Championship in 2018 and has already represented England at U15’s including captaining the team as well as playing over 70 times for Tigers juniors in the last 3 seasons. He follows a long line of Watkins to pull on the famous Tigers jersey.

Watkins has recently returned to the ice competitively after an injury sustained playing football with assured performances during the U17’s Winter Classic during the weekend of the 28th and 29th December.

Head Coach and General Manager, Tom Watkins commented, “I’m delighted to be able to bring in another exciting young player into the senior club. Sam has been practicing with us for two seasons now and having turned 16 recently is now eligible to play for the T1 & T2 teams moving forward. He will continue to play with the Under 18’s but will also be available for selection both Tigers teams in the same way we have utilised other young players which will give him the opportunity to learn what it takes to play against men and provide him valuable game time to keep progressing. Sam’s a smart young player who plays with maturity and responsibility in his defensive game, also has very good offensive instincts and was a key member in the U18 team that won the National Championship. As Head Coach of the Tigers, it’s great that as a club we have been able to provide so many of that team an opportunity into senior hockey in both the T1 & T2 teams. Like those other young players, Sam has earned this opportunity and like them I’m sure will thrive on the step up to senior hockey. Obviously, Sam is my son and I’m incredibly proud of who he is and the character he has shown in the face of adversity and the challenges he has had to overcome just to continue to play the sport he loves. As his coach, I can’t think of another player that deserves this opportunity more.”

Sam said “I’m very excited, and grateful to be a part of the senior club and for the opportunity that I’ve got. I can’t wait to keep improving, learning from my teammates, coaching staff and will do whatever it takes to help the teams.”

Sam’s #25 individual player sponsorship has already sold to Telford Copper Cylinders and his own loan shirts have gone to:
Home – Tigers 1 Volunteers
Away – Phil & Anne Briggs