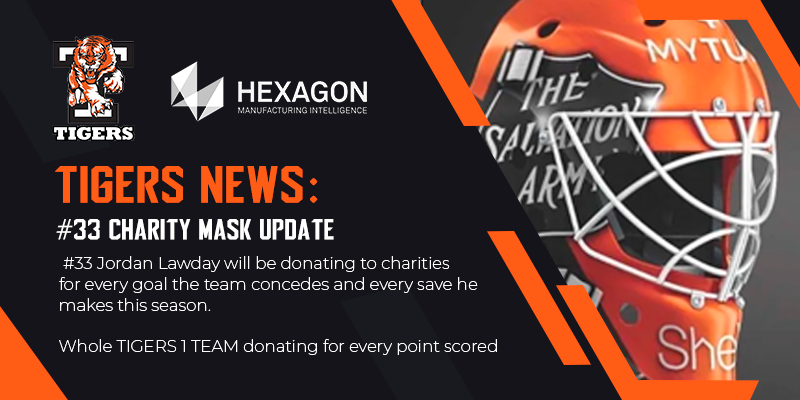 #33 Charity Mask – Update. As previously announced, Hexagon Telford Tigers #33 Jordan Lawday will be donating to charities for every goal the team concedes and every save he makes this season.

During the season, Jordan will donate 40p for every goal conceded and 20p for every same made. All donations will be divided equally between seven charities.

Jordan’s campaign has caught the imagination of several other teams and players as well as his Hexagon Telford Tiger teammates. The whole Hexagon Telford Tigers 1 team are now supporting Jordan by donating £1 per point that is scored (goals and assists each count as 1 point) throughout the season. So, the more points the Tigers score, the more that is donated to Jordans chosen charities.

Jason Silverthorn Tigers Team Captain said “We as a team are in full support of Jordan and the great job he’s doing by raising money as well as awareness for these great causes. I will happily donate £1 per goal/assist along with the rest of my teammates and would ask anyone else around the league if interested please get in touch and a massive thank you to those who have already publicly committed!”

Scott McKenzie, Tigers #77 also stated “Following the announcement last week, we had a team meeting and as a team, we agreed that we would all love to support Jordan with his charity incentive”.

Jordan has chosen the following charities, all of which are very close to his heart:

You can keep track of the donations at Jordan’s Just Giving page https://www.justgiving.com/crowdfunding/jordanlawday-charitymask?utm_term=WD3gV34ky

Jordan shared his thoughts on his charity push following the teams’ announcement “The help and support from everyone so far has been amazing, from people I play against to young junior goalies helping out I can’t thank them enough. When my teammates said that they would all like to chip in £1 per assist and £1 per goal I didn’t really know what to say and that’s a first for me. It’s an amazing gesture from every player and I really appreciate it, hopefully, we can help raise a lot of money for these charities.”

Jordan went on to say, “If any Tigers fans would like to donate, that would be amazing as well, but we all appreciate that these are extremely tough times at the minute so please don’t feel like you have to”.