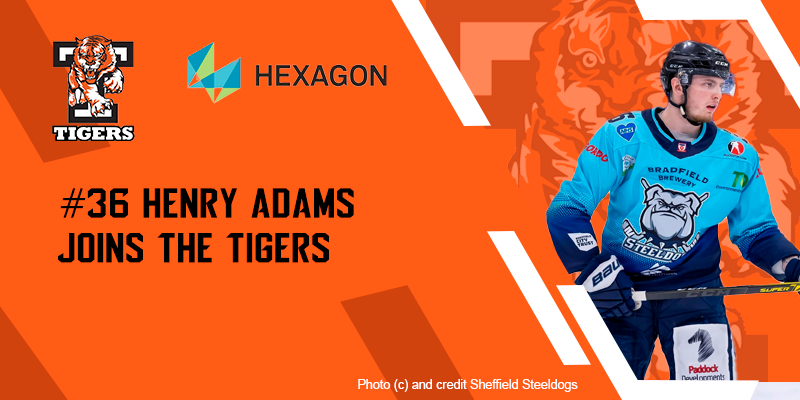 Henry, who played his junior career with the Telford Junior Ice Hockey Club, progressed to Tigers 2 and then Tigers 1 before moving to local rivals Solihull Barons at the beginning of the 2019/20 season.

Henry joins from Sheffield Steeldogs, where he played 50 times last season including 6 games in the play-offs culminating in winning the NIHL Playoff Championship.

Tom Watkins, Head Coach and General Manager, said, “I’m delighted to add Henry to the roster at This stage of the season. We didn’t expect to be adding a D man having had two forwards leave but when he came available it was a signing that makes complete sense.
He lives in Telford, he is a player I know very well having coached him throughout his junior career, winning a National Under 18 championship with Telford, he rejoins several of those players in this current Tigers roster. This ticks a lot of boxes for us with Jonathan Weaver currently unavailable, long-term injury to Deakan Fielder and having had Nick Oliver out the lineup for several games playing with just 4 D at times takes its toll. Henry has shown his ability at this level winning a NIHL playoff championship with Sheffield in 21/22 and is a solid left-handed D man, who although is still very young he has matured physically, and I believe he has his best hockey still ahead of him.”

Henry’s Own and Loan shirts are available now from the Telford Tigers shop for £125 each.

The Hexagon Telford Tigers would like to thank Electrobraze for being Henry’s personal sponsor.

His Own and Loan shirts are available now from the Telford Tigers shop for £125 each.