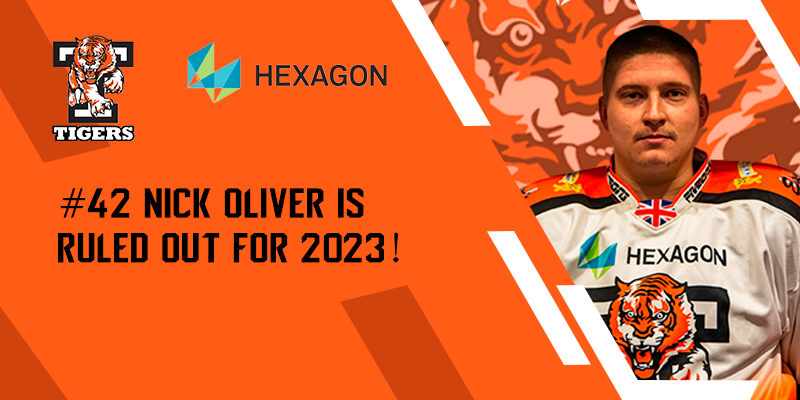 #42 Nick Oliver is Ruled out for 2023! The Hexagon Telford Tigers can confirm that #42, local, 25-year-old, defenceman, Nick Oliver has been ruled out with injury for the remainder of the 2022/23 NIHL National League season.

Nick, started playing for Telford Venom before moving across the Atlantic and made his return to Telford in the 2017/18 season. He has been a successful part of the team securing two NIHL Leagues, one NHIL Cup and one NIHL North Playoff

Nick recently had an MRI and the specialist has confirmed this week, that he requires surgery to correct the injury.  Nick is awaiting dates for surgery and the Tigers understand that following surgery, Nick will require at least six months of recovery.

Tom Watkins, Head Coach and General Manager, said, “It’s like buses, they all seem to come along together. Nick’s injury stems from an impact injury that he sustained earlier in the season.  He missed a few weeks for rehab and returned to the lineup after that period, however, he has been continuing to struggle which has limited his ice time recently. It’s another big blow for us as a team as Nick is a very consistent, very underrated player for us and is solid defensively week in and week out.”

Nick said, “I am disappointed with the news I have received about needing surgery and the amount of time I’ll be out for recovery, but I am more disappointed I can’t help out my teammates in what seems to be a difficult time for the team. They are all working extremely hard to get back to a level we are expected to be at I just wish I could have helped them through the battle. All the best to my teammates and Tom for the rest of the season.”

Hexagon Telford Tigers are actively recruiting a replacement for Nick before the transfer deadline.