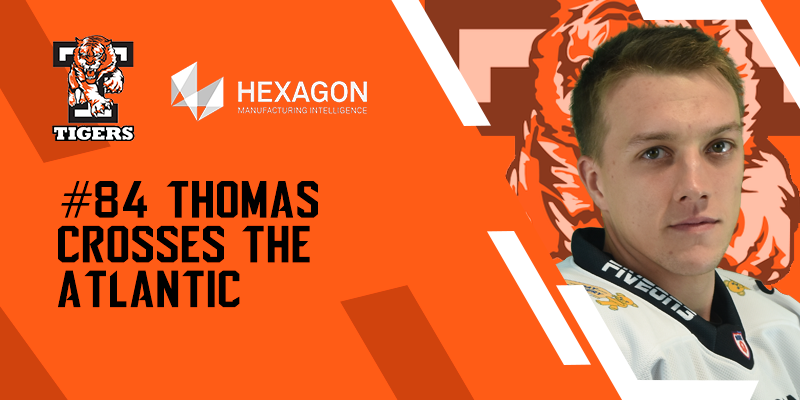 McKinnon appeared for Telford in the previous two seasons and was a part of the back-to-back winning league championship teams. Thomas has appeared for the club 88 times, scoring 26 points. McKinnon’s no-nonsense style of defending made him a firm favourite with the Tigers’ faithful and the club would like to thank Thomas for his services during the past two seasons and wish him all the best for the future.

Telford Tigers Head Coach and General Manager Tom Watkins commented “When Thomas told me he was considering moving across to North America with Kysten it certainly came as a shock and took me by surprise for sure. He is someone who I rate very highly as a person, always very reliable, committed as a player and an excellent professional. He loves to go head to head against the opposition’s best players, he relishes that challenge and more often than not, would come out on top. He leaves us after two seasons and a couple of League Championships. Thomas is a guy that knows what his strengths are and played to them every night, he played his role and did it to a very high standard. Certainly, an example to any young player on how important it is to understand what you bring to the team and then excel in that department/area. A very coachable player. I’d like to pass on my best wishes to Thomas & Krysten for the future as they make the move across the Atlantic.”

Thomas commented, “I just want to thank everyone from team management, team-mates, volunteers and the fans for the two great years I was in Telford. I made lots of good friends and have some great memories of winning championships. Telford Tigers are a Grade A organisation and I’m proud to have played there with some great players over the two years.”