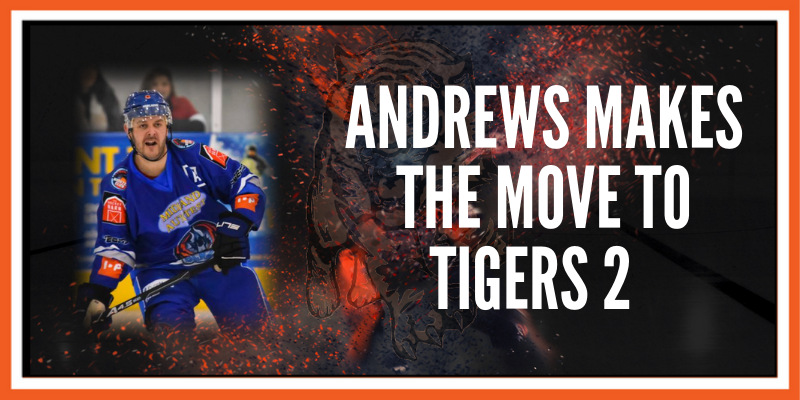 The 38-year-old brings over a decade of senior hockey to Tigers ice as he joins Telford Tigers 2 from Coventry Blaze NIHL. Andrews’ career begun in Swindon in 1999 where he first iced for Swindon Chill.

Since then, Andrews, commonly known as ‘Adz’; has been a part of numerous Midlands rosters. Adz’s ticks the boxes for having played for Telford’s biggest rivals having iced for Solihull Barons, Nottingham Lions and Coventry Blaze.

Tigers 2 coach Ces is looking forward to welcoming Adz to the team commenting;

“I’ve known Adz for years both on and off the ice. As soon as I was appointed as Tigers 2 coach, I was straight on the phone to him; we have a very young squad and I was looking for one player that’s been around and can steady the ship at the back.”

“Adz is a player you hate to play against but love to have on your team. He’s a great team guy and I think he will settle in very quickly. I know Adz isn’t coming here to make up numbers he’s coming here to win some silverware!”

When asked about joining Telford Tigers 2, Andrews was thankful for the support he received last season in Coventry commenting;

“Firstly, I would like to thank Sean & Steve Brookes of the NIHL Blaze for last season, leaving a club on good terms is always important to me.”

This season will be a Tigers debut for Andrews, having played against Tigers for the past few seasons, Andrews is looking forward to joining a squad of ‘familiar faces’.

“I’m looking forward to joining Telford this season, Callum Bowley built a strong squad last season with great work ethic and I was impressed with how they played. When Ces (Dave Fielder) made contact, I jumped at the chance to work under him. He’s a well-respected guy at Telford and a perfect replacement as Tigers 2 coach.”

“I’m looking forward to a fresh challenge and I’m sure with the squad which Ces is putting together it’s gonna be another exciting season for Telford 2 and its fans. I can’t wait to get going!“

Adz’s own and loan shirts are available to order now for £75 each (Home and Away). Please see the Telford Tigers online shop for more details.