Altrincham held all the Aces 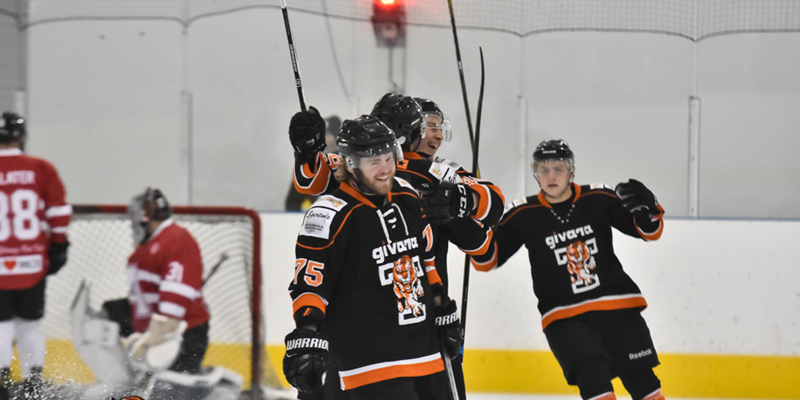 Telford Tigers 2 hosted Altrincham Aces on Saturday 21st October.  After the away defeat at the beginning of the season, Tigers were looking to gain the points using the home advantage.

Altrincham started strong scoring 2 even handed goals in within 8 minutes.  Tigers replied with a goal from #66 Matt Price assisted by #40 Ben  Washburn.

Altrincham picked up a 2 min penalty for too many men on the ice and tigers looked to even the score line. As Altrincham cleared the puck a line change enabled #71 Sheldon Cassidy to break away and score to make it 1-3. Tigers kept up the pressure with numerous attempts on goal all to no avail, until #72 Callum Bowley scored a power play goal at 18.16. Period ended 2-3

Altrincham again started strong in the 2nd period scoring a further 3 goals in the first 6 minutes. Frustration made the game heated with #39 Charlie Hammerton receiving 2 minutes for roughing plus 2 mins for slashing, to give the Aces a 4 minute power play. Tigers worked hard to kill the penalties with out conceding.

The third period saw tigers come out fighting for goals.  Declan Ryan in goal for the Aces was as usual on top form but #59 Jordan Jolly was able to sink a shot past him after receiving a pass from #2 Scott Venus, also assisted by #40 Ben Washburn. #49 Daniel Thomason scored another at 47.19 assisted by #94 James Smith and #72 Callum Bowley, making the score 5-6 going into the last 10 minutes of the game.

Aces answered back with a power play goal at 53.32. #72 James Smith made it 6-7 at 54.28 with an unassisted goal. Tigers continued to pressure Declan Ryan but to no avail.

Aces scored again at 55.54 which led to Tigers pulling the keeper to gain the extra player but unfortunately the Aces scored an empty net goal at 59.59 with just one second of the game remaining.

The game ended 6-9 in favour of the Aces.

Man of the match for Aces #9 Joe Greaves

Man of the match for Tigers #72 Callum Bowley