Anderton back for a third season! 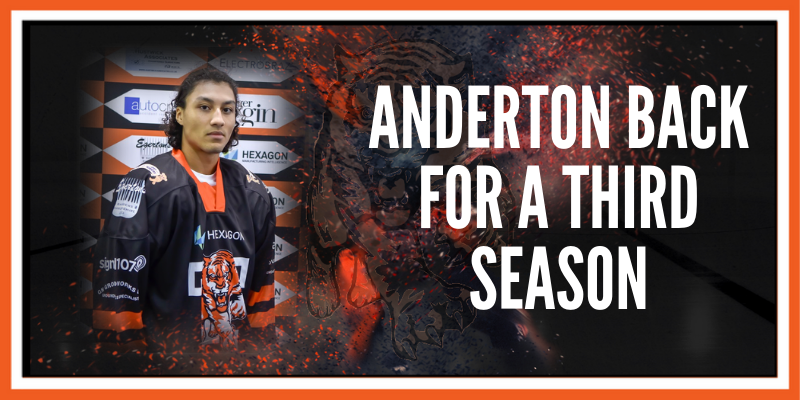 More exciting news in the Telford Tigers camp as the club are pleased to announce the return of forward, Brandon Anderton.

The 20-year-old has been playing hockey since 2013 though, this hasn’t stopped him making his mark across the Midlands based clubs. Starting off in Solihull, Anderton played through the junior system appearing on the roster for Solihull Knights and Barons, right from the under 16’s to the NIHL squad in addition to playing for Coventry Blaze NIHL.

Anderton pulled his first Tigers jersey in 2017 and quickly settled in. His first season for Tigers saw the forward rack up a respectful 28 points in 33 games, earn regular ice time and became a reliable, hardworking player. Last season Anderton also managed to bag his first play-off goal in the semi-final game against Hull Jets, a result which unfortunately didn’t go Tigers’ way.

Despite this season being the first season Tigers 2 coach Fielder will work with Brandon, he’s delighted to have secured the forward for another season commenting;

“I’m glad Brandon has agreed to come back; I’ve watched him the last couple of years and he is a very harder worker and a player that can play any roll on any line. I know he can third line grind as well as step up to the top two lines, he’s a very versatile forward to have on the team.”

When asked about his return to Tigers 2, Anderton commented;

“After playing at Telford for the last two season have made helped me a lot with my game. I cannot thank Bowls enough for all the work he has done especially when it came to me and I wish him the best for his future.

Again, as many of the other lads have said it was a no brainier re-signing with Telford this year! We have a great bunch of guys with great skill and I believe we are the team to beat in this division.

I can’t wait to see what our new coach Ces brings to our team, I’ve heard many things about him and I have no doubt he will only lead us to victory.”

Brandon’s own and loan shirts are available to order now for £75 each (Home and Away). Please see the Telford Tigers online shop for more details.