Another win for Tigers 2! 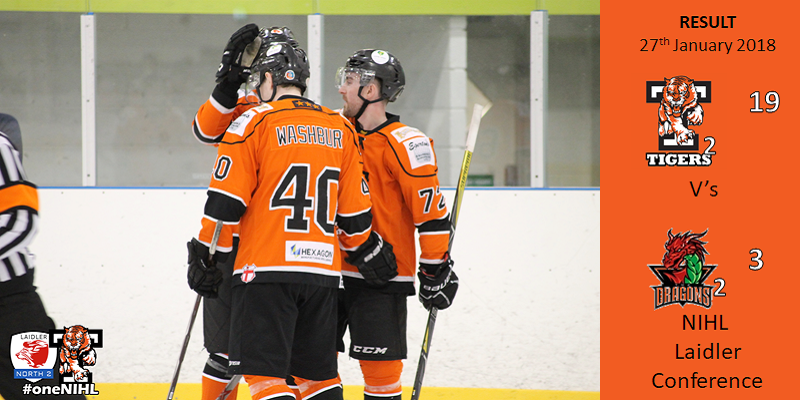 After a run of 11 wins for Tigers 2, this Saturday they hosted Deeside Dragons 2 at home, in hope to make it their 12th consecutive win in their 2017/18 Laidler campaign.

The puck dropped for the first period and Tigers 2 dominated the game quickly with a sharp and snappy goal with only 14 seconds on the clock from #72 Callum Bowley, assisted by #40 Washburn and #66 Price. The boys in orange continued to own the ice with a second goal less than two minutes later at 1:48 from #91 Hammerton.

There was no stopping Tigers 2, as their 3rd goal of the game came in shortly after. A shot from #40 Ben Washburn saw the puck slide past Dragons Net Minder Tegan Lavery at 4:23, assisted by #11 Anderton and #72 Bowley. It was Tigers’ captain #4 Karol Jets who secured the 4th Tigers goal of the night at 5:47, assisted by defenceman #18 Hustwick.

With a 4-goal lead, Tigers 2 regrettably took their foot of the gas and Dragons’ Sam Plant scored their first goal at 7:56. It didn’t take long for the host team to take back the possession of the puck and #18 Josh Hustwick tapped the puck into the Dragons net at 13:19, assisted by Bowley and Washburn. Tigers 2 continued to add goals onto the scoreboard with another goal just 20 second before the end of the first period from #91 Hammerton, assisted by #39 Aston and #4 Jets. The first period ended in Tigers 6, Dragons 1.

The puck dropped for the second period and Tigers 2 had yet again a solid start to the period. A further two goals were scored within in the same minute from #4 Jets at 22:42 and #15 L.Smith at 22:51. At 26:55, the Dragons managed to slide the puck past Tigers’ netminder Ted Thompson giving Deeside their second goal of the game! For the remainder of the second period, it was a goal frenzy for the host team another 7 goals being scored; including a gaol from Tigers Junior Rhys Howells. The second period ended in Tigers 15, Dragons 2.

The Dragons continued to show grit, hard work and determination into the third period but it was the Tigers who still came out on top. The first goal of the final period and the 16th goal for Tigers was scored by #39 Joe Aston, assisted by #91 Hammerton and #66 Price. Continuing with the remainder of the final period, Tigers were given several penalties however, the Dragons were unable to capitalise on the power play until a hooking penalty given to Tigers’ Hustwick at 49:27. The Dragons scored their third goal of the game at 50:52.

Tigers 2 quickly responded to the Dragons’ third goal scoring another 3 goal before the sound of the final buzzer went. A disappointing game for hardworking Deeside Dragons but a 12th consecutive win for Telford Tigers 2.

Telford Tigers 2 now at the top of the Laidler Conference League table and continue to retain their spot as they work towards earning themselves a spot in the play-offs. Tigers 2 continue their weekend of hockey in Sheffield on Sunday where they will face Sutton Sting.