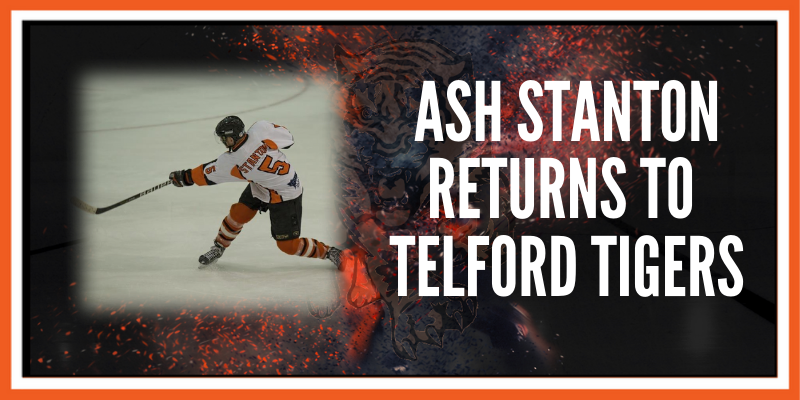 The Club are pleased to announce the return of another familiar face… Ashley Stanton returns to Telford Tigers!

The 35-year-old first made an appearance on Shropshire ice in 2001 where he iced for Telford Trojans in the England U19 league. Since then, Ash (Ashley) has appeared on the roster for several Telford teams including Trojans, Wild Foxes, Titans and of course Telford Tigers. Stanton will be joining the Telford Tigers 2 squad, competing in the NIHL Laidler league for the first time in his hockey career.

“Ash has been out the game for several years now and when I heard that Ash wanted to play, I needed to know he was ready to return and play at a high level again. I’ve spent the summer watching him work hard, preparing for the upcoming season.

Ash is a tough player, a team guy and can play in any position. All in all, he will be a great asset to the team.”

Ash, who last iced for Telford in 2014 is delighted to have signed for the upcoming season. It’ll be an emotional return for Stanton; overwhelmed about his return he said;

“It’s an honour and a pleasure to be wearing my number 5 Tigers shirt once again. Thank you to everyone who was party to the decision making of my return, it’s going to be hard to hold back the tears on the first game.

I’ve had a tough few years with mental health. Coaching the younger generation in Telford has been not only been a pleasure, but has been my escape and joy in life! I’ll be back with a bang this season. I wear my heart on my sleeve and my bloods have run orange and black since I was a kid… I’m coming home!

Bring on the noise! Much love, Stanton #5”

Ash’s own and loan shirts are available to order now for £75 each (Home and Away). Please see the Telford Tigers online shop for more details.