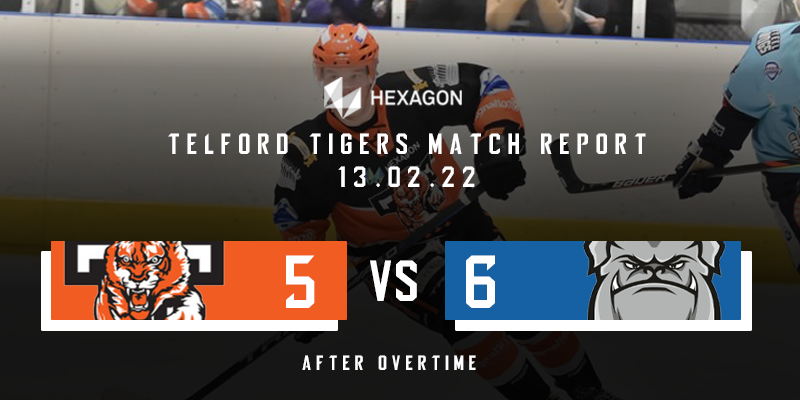 With the Tigers’ lead at the top of the table cut to three points, it was vital they made a quick start to the game and they did just that, scoring with their first shot of the game. Brad Day in the Tigers’ goal made a terrific save from a close-range shot which led to the Tigers having a breakaway led by Jack Hopkins. Hopkins sent a cross-ice pass to Luka who hit a first-time shot past Dimitri Zimozdra in the Sheffield goal.  Sheffield hit back to equalise five minutes later.  Ricky Plant had served a tripping penalty which Telford had killed off but before the team could get reorganised, Sheffield scored with Ben Morgan shooting low through Day’s legs to draw the sides level.

Tigers then hit the frame of the goal twice in quick succession. First – Jack Hopkins hit the post then Jason Silverthorn’s rising wrist shot hit the crossbar and bounced away from goal.

Sheffield’s luck ran out shortly after as Tigers struck again. Deakan Fielder won the puck and sent Brodie Jesson clear on goal to score with a cool finish past Zimozdra.

Tigers were enraged when a late hit by Thomas Palmer on Jonathan Weaver went unpunished. Fin Howells went after Palmer and the pair dropped the gloves. Howells was given an extra penalty for instigation but this was successfully killed off.

Soon after, Sheffield’s Alex Graham was called for tripping giving Tigers their first power play of the evening. Austin Mitchell-King’s shot caused a scramble in front of the Sheffield goal, the puck bounced out perfectly for Bayley Harewood to chip the puck over the prone Zimozdra for Telford’s third goal.

Tigers rounded off the period with a fourth goal. Luka’s powerful shot was tipped by Scott McKenzie past Zimozdra, with the Sheffield netminder so angry with the goal he smashed his stick, breaking it in half.

Tigers lost all the momentum in the second period and were sluggish throughout the whole twenty minutes. Sheffield’s Jason Hewitt hit the post early on and it wasn’t long before Sheffield had a second goal. Harewood turned the puck over in the defensive zone, allowing Lee Bonner to find the unmarked Andreas Valdix who shot past Day. Sheffield added a third goal late in the period. Another defensive turnover led to Matt Bissonnette having a clear shot at goal and he easily beat Day to draw the Yorkshire side within a goal of Tigers’ lead. Telford were thankful to Day for stopping Bonner who had a breakaway on goal but Day blocked the shot. Tigers were glad to hear the buzzer at the end of a very disappointing period and headed off the ice to regroup.

Tigers continued their sloppy play in the third period and, despite being on a power play, conceded a fourth goal. Jonathan Kirk was serving an interference penalty when a turnover by Jonathan Weaver at the Sheffield blue line allowed Alex Graham to skate in on goal unopposed and score with a neat finish past Day to draw the sides level. With Sheffield dominating the game, Tigers were delighted to regain the lead with ten minutes of the period left. With Lee Bonner serving a clipping penalty Harewood scored his second of the night with a terrific low shot. Shortly after, Tigers had a glorious chance to seal the match with a penalty shot but Luka’s effort was saved well by Zimozdra. As the game entered the final ninety seconds, Sheffield pulled Zimozdra from the goal to add an extra attacker and the tactic paid off when Bissonnette shot through Day’s legs to draw the sides level again and send the game to overtime.

Tigers almost won the game when Silverthorn’s shot was blocked on the post by Zimozdra and the Tigers’ captain was knocked to the ice behind the goal leaving him out of position allowing Sheffield to break away. The puck was sent behind the Tigers’ net and Day lost his position whilst trying to save a shot, allowing Graham to send the puck in front for Lee Haywood to tap into the empty net and win the game.

Tigers gain a point and with Swindon losing in Romford against Raiders, the lead at the top is back to four points and Tigers hold a game in hand.

After the game Head Coach Tom Watkins commented, “I think tonight we looked like a team playing their sixth game in ten days. Despite the score at the end of the first period being 4-1, which probably flattered us to be truthful. We made a lot of individual mistakes, didn’t manage the puck well and turned a lot of pucks over in the neutral and defensive zones. The blue lines are key areas on the ice but today we lost key battles in that area, struggled to establish a solid forecheck with our top two lines working on different pages it seemed. We had the chance to put the game to bed but didn’t execute it, unfortunately. After the run of games, fatigue plays its part for sure.”