Back to Winning Ways for Tigers 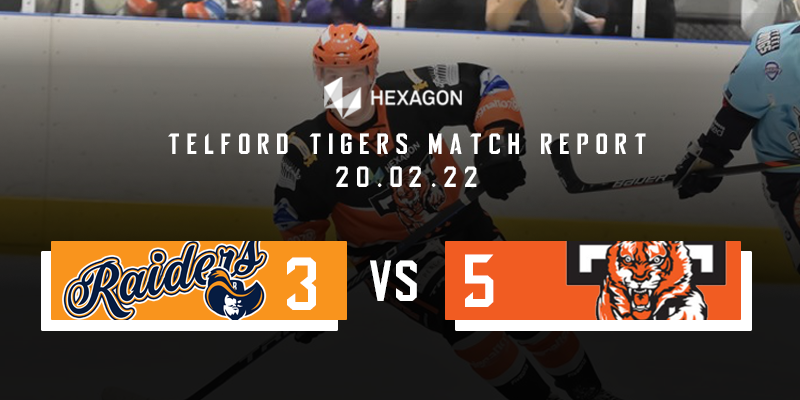 Back to Winning Ways for Tigers. Hexagon Telford Tigers travelled to Romford for the second of back-to-back games against Raiders. Tigers had lost at home the previous evening ending with a 6-4 defeat but still led the league standings by four points.

Tigers were still without Jack Watkins, Sam Watkins and Ross Connolly but were delighted to welcome back Thomas McKinnon from injury.

Tigers made a poor start to the game and found themselves a goal behind in the early stages. Erik Piatak was allowed far too much time and space to skate in on goal and lift the puck over Brad Day to open the scoring. Telford almost conceded again straight after as Day left his goal to play the puck and his attempted clearance hit the glass and landed perfectly for a Raiders’ forward who shot at the empty net but Jonathan Weaver had covered behind Day and blocked the shot. The reprieve was temporary though as further poor defending gave Tommy Huggett a free run on goal and he scored at the second attempt. Tigers finally started to get some pressure on Michael Gray in the Raiders’ goal and pulled a goal back. Weaver’s shot was saved by Gray and Silverthorn’s follow up shot rebounded to Plant who shot past Gray to halve the Raiders’ lead.

Tigers were much better in the second period and dominated much of the period but were once again indebted to Day for keeping them in the game – one save from a shot from Brandon Ayliffe was superb, diving from one side of the goal to prevent a certain goal. That save proved to be vital when Tigers drew level shortly after. Bayley Harwood took control of the puck at the halfway line and skated at speed towards goal. With Raiders expecting a pass, Harewood hit an unstoppable shot into the top corner of the goal past Gray. Within two minutes, Tigers had their first lead of the night. Jack Hopkins sent a cross ice pass to Vladimir Luka who entered the Raiders’ defensive zone and hammered a fierce shot past Gray, before he could react, to give Tigers a deserved third goal.

The third period saw Tigers dominate further and early on added a fourth goal. Gray had made a save from Silverthorn and Jonathan Weaver was first to the rebound and the veteran defenseman waited patiently before sending a low shot past Gray. Tigers then added a fifth goal whilst short handed. As McKinnon was serving a clipping penalty, Plant and Silverthorn combined to give the Tigers’ captain a tap in. JJ Pitchley scored shortly after with a power play goal for Raiders to cut Tigers’ lead to two but Telford sensibly saw out the rest of the game without giving Raiders any clear cut chances. The much needed win ends Tigers’ winless streak at three and maintains the lead at the top of the table.

Man of the match: Bayley Harewood.

After the game Head Coach Tom Watkins, commented, “Tonight was a real gut check time for us and we needed to show a lot of resilience to bounce back. It has been a tough weekend against a team we respect a lot, who never stop and you know you’re going to have to be at your best to compete.

It was a big challenge but a great feeling to get this ship turned round and moving in the right direction again. The team rose to the challenge and showed strong mental fortitude particularly after falling two goals behind, but no panic and from there a very good professional performance.”