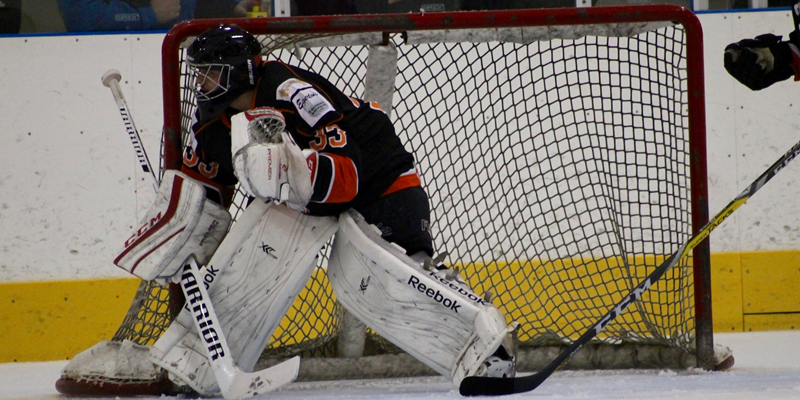 Netminder Denis Bell is relishing the responsibility of his first senior starting position with Telford Tigers in the NIHL Moralee Conference this season.

The 20-year-old has been a revelation for Telford since his arrival at the start of the year, with a string of match-winning performances.

And he was delighted to answer the call from Telford Tigers Head Coach and General Manager Tom Watkins in the summer, as the Tigers chief rebuilt his side for the new campaign.

Bell said: “I’m very happy to be back in Telford, I know the place well and it really is like a home from home for me now.  Tom has put together a great dressing room, everyone gets along really well and we have a fantastic mix of young and older professionals.  It’s a pleasure to play and train with the team and I am really enjoying my hockey at the moment.”

Bell’s previous spell in Shropshire, from 2014 to 2016, saw him impress for the club’s younger NIHL side – prompting a Great Britain under-18s call-up.

Those performances have continued during the current campaign, with a save percentage of 93.94% taking him to the top of the netminding charts.

He added: “I’m looking forward to seeing where the season goes for us, being top of the netminding charts is nice but my number one aim is helping the team do as well as possible and hopefully continuing our push for honours come the end of the season in April”

Telford Tigers 1 are in National Cup action on Saturday night when they travel to Wiltshire to face Swindon Wildcats (6.15pm).  They then host Whitley Warriors in the NIHL Moralee Conference at Telford Ice Rink on Sunday evening (6pm).

Telford Tigers 2, meanwhile, take on Hull Jets in Humberside on Saturday (5.15pm), ahead of a trip to face Sutton Sting on Sunday (4.15pm).