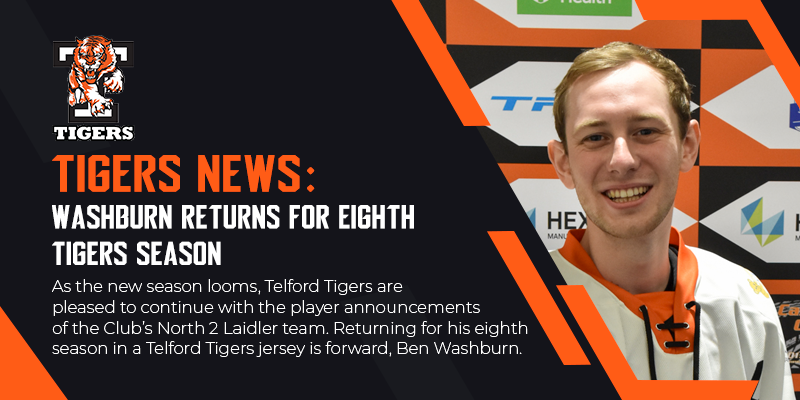 Washburn returns for eighth Tigers season. As the new season looms, Telford Tigers are pleased to continue with the player announcements of the Club’s North 2 Laidler team. Returning for his eighth season in a Telford Tigers jersey is forward, Ben Washburn.

Washburn began his hockey career in Telford 2005 where he developed through the junior hockey system. Starting with Telford Venom, he progressed his way through Telford Trojans and Telford Titans to then finally make his senior Tigers debut in 2014. The now 24-year old has played for the NIHL side in Telford for the past seven seasons and has made his mark every season wearing the number 40 shirt.

Despite Washburn’s last season on the ice being cut short due to the Covid-19 lockdown, he still managed to sweep up on both the ice and in the dressing room. Whilst taking on the Captaincy role, Washburn took the top spot for assists within the team as well as being presented with the players’ player award at the Club’s virtual end of season awards last Summer.

Telford Tigers 2 coach Scott McKenzie is thrilled to have secured Ben for the upcoming season commenting:

“It’s great to have Ben back in a Tigers jersey. He is a glue player, which means that he is consistent, hard-working, creative and committed.

He is someone that can play up and down the line-up and extremely important to the Tigers. As a coaching staff, we are looking for a big season from Ben as we all know his capabilities.”

Ben is also pleased to be returning to Tigers for another season commenting;

“It’s been a long time coming, I’m really excited to get back on the ice, get back with the lads and prove a point that Telford belongs at the top and in contention for all competitions we are involved in this year. It’s always an honour to pull on a Tigers shirt, playing for a top draw organisation, a fantastic coaching team with a first class set of lads in front of the best fans in our league.”

Ben’s own and loan shirts are available to order now. Please see the Tigers’ Online Shop for details.