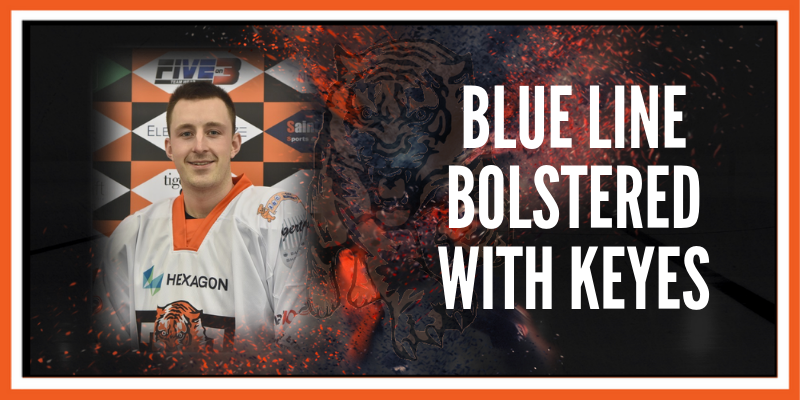 Telford Tigers are still busy behind the scenes securing more players ahead of the fast-approaching new season and today, the club would like to welcome back defenceman, Connor Keyes!

The 24-year-old developed through the Solihull hockey system appearing on the rosters for Solihull Barons and Knights during his teen hockey years. The 2015/16 saw the defence-man sign for Coventry Blaze NIHL, where he iced for two full seasons before making the move to Telford Tigers early on in the 2017/18 season. Since then, Connor has made his mark at Telford and has become a solid defenceman which the team can rely on.

Tigers 2 coach Dave Fielder is yet to work with Keyes, but is excited to have him on board this season commenting;

“When I first signed as coach I was disappointed to hear that Keyes was moving on… But a few weeks later it was great to get the phone call saying that his circumstances had changed and that he wanted to stay at Telford.

Connor is a big solid defenceman that is a true team guy; this season I would like to see him pick up more points. I think he’s more than capable of hitting the double-digit mark with some guidance and the right ‘D’ partner.”

When asked about his return to Tigers 2 for another season, Keyes commented;

I’m looking forward to what will be my third season with the Tigers. Under Fielders leadership this year, we can certainly put out a solid team performance.”

The past two seasons Keyes has been part of the Tigers squad at the Laidler Playoff weekend and he is nothing but determined for this years’ competition.

“Last season we finished the season in 2ndin the league and this season we’ll be finishing with some silverware!”

Connor’s own and loan shirts are available to order now for £75 each (Home and Away). Please see the Telford Tigers online shop for more details.