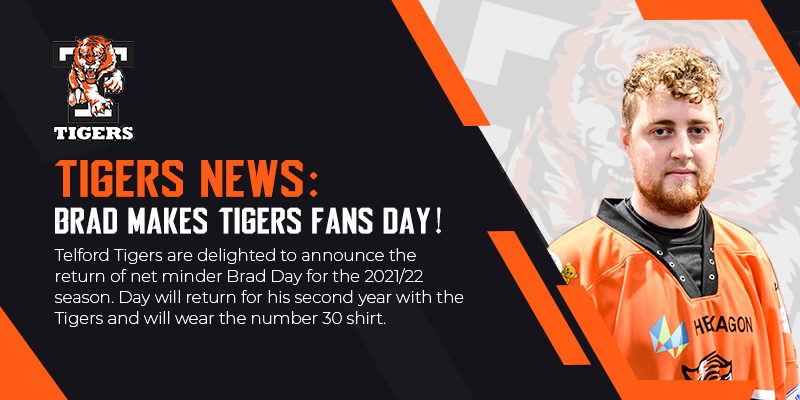 Telford Tigers are delighted to announce the return of net minder Brad Day for the 2021/22 season. Day will return for his second year with the Tigers and will wear the number 30 shirt. Day was a key part of the team that won NIHL League and Cup double in 2019/20.

Brad stated, “I’m really happy to be back. After the success of my first season here it was an easy decision to come back. It is a great club with a very strong and passionate fanbase. As a goalie, it’s great to play for a coach who has a lot of focus on the defensive side of the game and who believes in my ability. We had a great season in my first year here and I enjoyed being a part of that on a daily basis. It was such a shame how that season ended without getting a chance to do the treble but I look forward to competing for trophies again next season.”

Tom Watkins, Head Coach and General Manager, said, “Brad plays in the most important position on the team without question. He gives us a chance to win every night and more often that not we got the two points. He had a remarkable first season in Telford and he played every game and every minute of each game except for 25 minutes. That consistency from your goalie is huge. I made it my business to speak to Brad as a priority ahead of the season. Brad is an extremely likeable person on and off the ice and is very easy going and doesn’t let anything get on top of him. He moved past mistakes with ease and is probably the calmest goalie I’ve ever worked with. You don’t win without good goaltending, this signing will give us lots of confidence and add belief to the team in front of him. I’m delighted he will be back for another season and with the time off during the pandemic he will have been working hard to maintain and improve his athletic ability.

Telford Tigers would also like to thank Standard Motor Transport who have agreed to be Brad’s individual sponsor for a further season. Brad’s own and loan shirts are available to order now for £100 each (Home and Away). Please see the Tigers’ Online Shop for details.

In the 2021/22 season, Tigers are again offering individual player sponsorship at £400. The package will include a personalised ‘SPECIAL’ exclusive third jersey with a company name or family name patch, announcements on match nights, a small advert or logo in the match night programmes and a signed player photo.  The jersey will be worn for cup games and play-off games and will not be available as a replica.