Brown is back in town: Zack Brown returns to Tigers 2 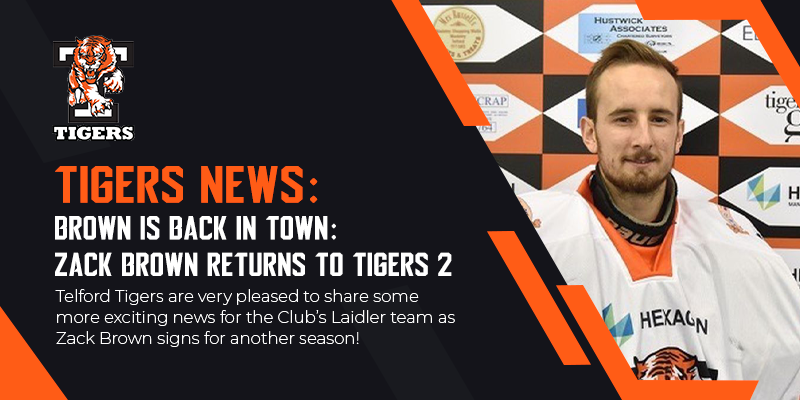 Telford Tigers are very pleased to share some more exciting news for the Club’s Laidler team as Zack Brown signs for another season!

Having iced for clubs such as Hull Pirates, Sutton Sting and Sheffield Senators and Steeldogs, the now 25-year-old brings valuable experience and skills to the Tigers 2 outfit.

Zack joined Telford Tigers 2 partly through the 2017/18 season, where he had previously been icing for Hull Pirates, competing in the Moralee North 1 League; a time before the NIHL National Division was introduced.

During this season, Tigers went through December unbeaten with five wins from five including a win at promotion chasing Altrincham Aces. Brown posted an impressive .915 save percentage in the month including a shared shutout against Blackburn, 45 saves against Sheffield and 43 saves at Altrincham which led to him being awarded with the NIHL Player of the Month award for his achievements.

Brown then continued to push his average save percentage into the next season where he once again stood between the pipes for Telford Tigers 2, but not from the get go… The netminder initially started the season at the Laidler team’s rivals, Sheffield Senators but Tigers managed to snap him back up during the short-lived transfer window in January 2020 for the remainder of the season.

Zack is returning to the club once again with an optimistic attitude and is hopeful for a successful season.

Telford Tigers 2 coaching team Scott McKenzie and Doug Wildman are delighted to have signed Zack for the upcoming season, commenting:

“We are very happy to see Zack back with us this year wearing the Tigers jersey once more after joining us at the tail end of last season. He has bags of ability and tracks pucks very well. Zack has plenty of experience and composure between the pipes and we look to him this year for that leadership to give confidence with his consistency to the team from the off. Again another player that is potentially one of the best in his position in NIHL2, when focussed.”

Zack is looking forward to returning to Telford Tigers commenting;

“I’m very happy to be back for another year. After the last year it’ll be good to get back into the swing of things. With the group Scotty [McKenzie] has managed to piece together, I’m excited to see where we’ll measure up with the rest of the league and hopefully be pushing towards the top end of the table and playoffs.”

Zack’s own and loan shirts are available to order now for £75 each (Home and Away). Please see the Tigers’ Online Shop for details.