Brown is back in Town for Tigers 2! 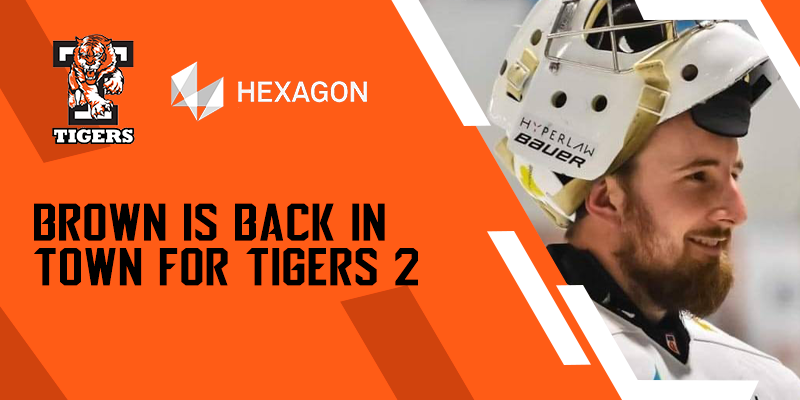 Telford Tigers are delighted to announce the return of Zack Brown to the Club. Zack will be signing for the Club’s Laidler side, Telford Tigers 2 for the remainder of the 2022/23 season.

Brown has previously iced for clubs such as Hull Pirates, Sutton Sting and Sheffield Senators and Steeldogs before joining Telford Tigers partly through the 2017/28 season.

During his debut season, Tigers went unbeaten through December posting an impressive 92 save percentage in the month including a shared shutout against Blackburn, 45 saves against Sheffield and 43 saves at Altrincham which led to him being awarded with the NIHL Player of the Month award for his achievements.

Brown then continued to push his average save percentage into the next season where he once again stood between the pipes for Telford Tigers 2, but not from the get go… The netminder initially started the season at the Laidler team’s rivals, Sheffield Senators but Tigers managed to snap him back up during the short-lived transfer window in January 2020 for the remainder of the season.

Last season, Brown helped build the foundations for a league winning roster. Another super impressive performance for Brown saw him put up a 91save percentage across the season, helping the Tigers 2 side sail through to the Laidler League Cup final, Playoffs Final and securing the Laidler League title.

Tigers 2 Coach Scott McKenzie is delighted to have signed Zack for the remainder of the season commenting:

“It’s great to have Zack back. We all know the quality that he brings to the line up and him and OJ have a great relationship. He has bags of ability and played a key part in last season’s success. Zack is familiar with the group and will slot back in with ease.”

Brown is looking forward re-joining the Telford Tigers 2 side and icing with his fellow Tigers teammates once again commenting;

“It’s good to be back! The boys have had a great start to the year and hopefully we can keep that going in the same direction.”

Zack’s own and loan shirts are available for £75 each (Home and Away). Please see the Tigers online shop for details.

In the 2022/23 season, the Tigers again offer individual player sponsorship at £400. The package will include a personalised “special” exclusive third jersey with a company name or family name patch, announcements on match nights, a small advert or logo in the match night programme and a signed player photo. The jersey will be worn for cup and play-off games and will not be available as a replica.