Bulldogs roll over for Tigers 2 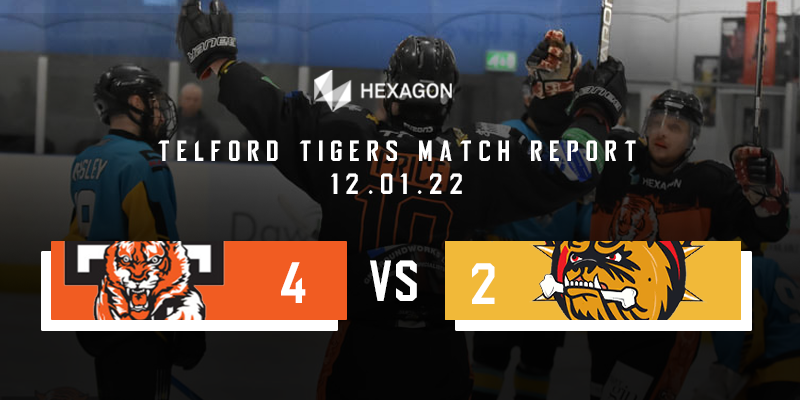 Bulldogs roll over for Tigers 2. Hexagon Telford Tigers 2 welcomed Bradford Bulldogs to Telford Ice Rink for their final clash of the season on Saturday night. Tigers 2 have been looking to continue their winning ways since the disappointing cup loss against Hull Jets. The last meeting between the two teams resulted in the Bulldogs crashing out of the Laidler cup in the semi-finals back in December.

The puck dropped for the first period, and Tigers didn’t waste any time in setting the pace, marking the score board first with an even-handed goal from Filip Supa at 42 seconds. The Bulldogs weren’t going to settle for an easy game and shortly responded with an equaliser less than 20 seconds later when Lucas Vince managed to slot the puck past Tigers’ Oli Johnson. Looking to regain control, Tigers reset their game play and no more than five minutes later, they quickly found themselves back in the game with a one-goal lead after Rhys Howells found the back of the Bulldogs’ net. The first period ended with Bulldogs trailing by one goal.

It was a disappointing start to the second period for the visitors, giving Tigers a two-goal lead after Filip Supa netted his second goal of the game no more than two minutes into the period. The Bulldogs started to become frustrated, continuously finding the puck in their zone of the ice pad. An unsportsmanlike conduct penalty for Bulldogs’ Barlow provided the Tigers with a powerplay opportunity, but Bowell denied the Tigers of all chances and the short-handed side killed the Tigers’ powerplay successfully.

Just as the Bulldogs thought they had pressed the reset button on their gameplay, they found themselves handing Tigers with another powerplay. Bulldogs Captain Dean Boothroyd was penalised for a two-minute tripping penalty, leaving his side a man-down on the ice. Once again, the majority of the puck action was in front of the Bulldogs’ net for the powerplay and short of one-minute in, Tigers capitalised. A pass through from Liam Bartholomew to Rhys Howells who slickly tapped the puck into the net, bagging the fourth goal of the game for the hosts.

The puck dropped for the third and final period and this time, it was the Bulldogs who were quickest out the blocks. Poor defensive play from the face-off allowed Bradford’s Boothroyd and Barlow to set up the ideal play for Joshua Stockton to finish the job and net their second goal.

With the Bulldogs on the bounce back and a full period to play for, Tigers were eager to maintain their [now] two-goal buffer until the final buzzer. Bulldogs were given a man advantage just ahead of the half-way point of the final period after Matteri was hit with a minor penalty for kneeing. This was shortly followed by a cross-check penalty for Tigers’ Keyes, gifting the Bulldogs with a brief two-man advantage, but they were unable to capitalise.

Tigers managed to hold on to the two-goal advantage and sent Bradford home with another disappointing Telford defeat.

“We’ve had success against the Bulldogs in our previous games but we knew Bradford were never going to come here and roll over. We started very well and in the first period the game looked comfortable for us as we had Bulldogs’ share of the puck and control of the game.

We didn’t play in the second period how we know we can or how we had started and allowed Bradford back into the match. Not much changed for the remainder of the game and the tempo from both sides never seemed to lift back to where it should have been.

Although we were happy with the final result which keeps us firmly in the running for the league titles we were disappointed with our lack of intensity throughout the game so we must find our consistency again if we want to remain in the title race.”

Man of the match: Rhys Howells