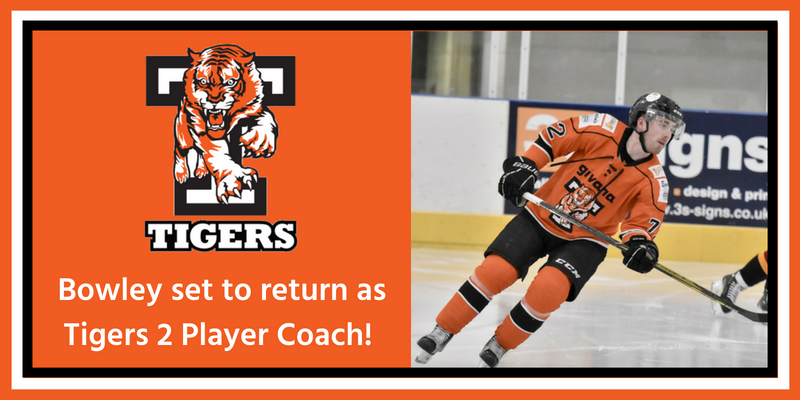 Will he, or won’t he? That has been the question over recent weeks. Many Tigers stalwarts never thought that the answer to that question would ever be in doubt. Though some did! We can now, publicly announce that Callum Bowley will be returning for the forthcoming season as the player coach for the Tigers 2 team.

Given his first season last year as both an impact player and Coach for the Tigers D2 side this is a huge boost for Telford Tigers. Looking back on last season the D2 team came from nowhere at the start of the season, to challenging for league placings and silverware at the end. All of this in no small part down to Callum Bowley.

It’s great news to hear that Callum returns for this season’s campaign where the objective is to use last season’s team foundations to build on, and to improve again on this with a view to securing both improved league placings and a much better outcome in the league playoffs.

Tom Watkins Telford Tigers GM and Head Coach commented “Callum did a very good job leading the D2 team last season. His playing ability was never in doubt and is one of the most gifted players in the league, but to add a coach title makes life far more complicated. He handled the role very well and has some very good people around him to support and advise. It’s extremely difficult role to be a player/coach, I was very pleased with how Callum handled the role and he was rewarded with a strong league campaign and qualifying for the playoff finals.”

When questioned, Callum expressed similar excitement about the forthcoming season: –

“After speaking with Mike and Tom, it was quite an easy decision to come back and take on the role again as player coach for the Tigers D2 team. I thoroughly enjoyed my first season as a player coach and believe I learned a lot about myself and the team as the season progressed.

It’s really very different going from being a player to being a player coach, there is much more preparation that goes into everything that you do. Last season we had a great core group of guys that I would like to build this season’s team around and look to continue to develop our pathway of talent in Telford.It goes without saying, I’m looking forward to the start of the season and can’t wait to go one step further this time around. It should be an exciting season ahead for sure.”

All in all, brilliant news for Telford Tigers.

Callums’s #72 own and loan shirts are available to order now for £50 each (Home and Away). Please see the own and loan registration page for more details and to register.