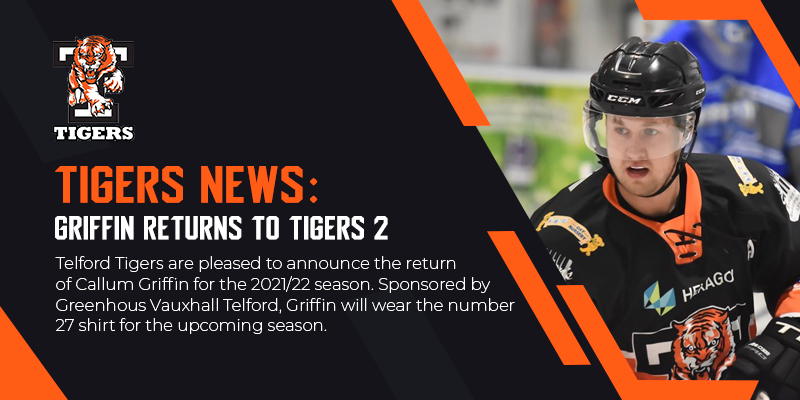 Callum Griffin returns to Tigers 2. It’s all systems go at Tigers HQ with our player announcements for both teams coming thick and fast! Today, the Club are pleased to announce the return of another familiar face to Tigers 2. Welcome back Callum Griffin!

The 27-year-old forward first appeared on Telford Ice in 2008 where he began his hockey career progressing through the Telford Junior system. Since then, Griffin has iced for several teams playing out of Telford ice rink such as, Telford Trojans, Titans and then finally Telford Tigers.

As a car salesman by day, Callum has balanced his work life and hockey life for the past few seasons. The forward’s last season on the ice [before Covid-19] was the 2019/20 season where he managed to bag on average one point for each game he played. Callum has always been an integral part of the Tigers 2 set up. During the 2019/20 season Callum played an important role in the team’s leadership group as Assistant to former Captain Ben Washburn.

Griffin is also no stranger to hockey under [Scott] McKenzie’s lead, having played under his coaching team in the past. Both Scott and Doug [Wildman] are delighted to have secured Callum for the upcoming season commenting.

“It’s great to see Callum back in a Tigers jersey this year. Another local talented player who has come through the junior system in Telford and has an excellent skill set. Callum is a natural goal scorer, and we expect him to put good numbers up this year.”

Griffin comments on his return saying:

“I’m very excited to be back wearing the Tigers shirt for another year. I played for Scotty many years ago, so I know what he expects. He is a great coach with a lot of knowledge and is well respected in the game. Scott will bring a lot of professionalism and discipline to the team which can only be good news, so when I heard that he was staying on to continue as coach after last season never happened, I was excited to say the least!”

Callum will be returning to Telford Tigers for his seventh season is looking forward to getting back on the ice with his fellow teammates.

“I cannot wait to get back on the ice with the boys, it feels like a long time coming and I know we have a point to prove to get back where we belong in the league table. I hope everyone is staying safe and I can’t wait to see everyone when the season finally starts.”

We would also like to thank Greenhous Vauxhall Telford who have agreed to be Callum’s individual sponsor for a further season. Callum’s own and loan shirts are available to order now for £75 each (Home and Away). Please see the Tigers’ Online Shop for details.

If you are interested or require more information on the individual player sponsorships, con- tact marketing@telfordtigers.net.