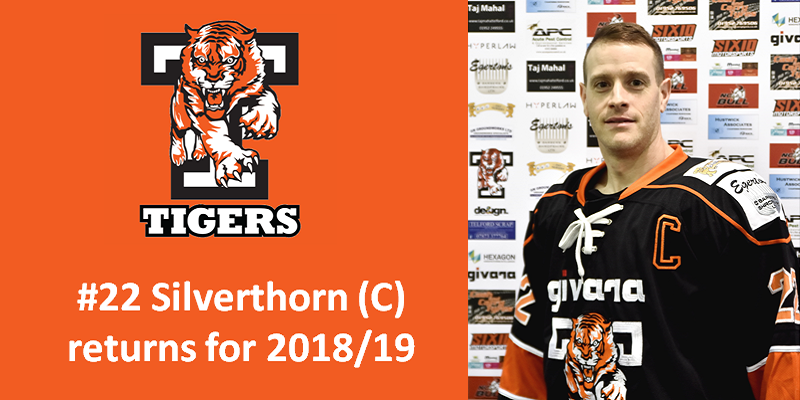 With just under three weeks since our highly successful presentation evening and everyone associated with the Tigers has been working hard in the background to lay the foundations for the 2018/19 season. Tigers management know that all the fans who follow the club are keen to hear about our first signing for the 2018/19 season and what’s better that this?

Jason amassed 91 points in a very strong debut year in the NIHL, leading Telford to the overall play-off final in Coventry last month.

Tigers head coach, Tom Watkins, said: ‘Jason has been an integral part of the clubs success in his time in Telford. He and his family have settled here and is the ideal person to be our club captain. He work ethic and commitment is there for all to see, his desire to win, to compete and improve are really the epitome of who he is a player. He makes us better as a team and sets a very high standard for all the others to follow.

This year will see Jason become more established as part of the coaching team. Not a huge change, as he is someone that Tom Watkins (GM & Head Coach) constantly talks strategy with and respects his opinion. He is very knowledgeable about the game and what is required to succeed.’

The summer break has given Watkins a chance to reassess his squad for next season, as he looks to improve on last year’s third-place finish in the league.

Watkins added: “ideally I would like us to be faster and have some more grit in the coming season, but it’s never easy to recruit exactly what you want, we’re working really hard behind the scenes to deliver another competitive squad for 2018/19. ”

Jason’s own and loan shirts are available to order now for £100 each (Home and Away).

New for 2018/19 Tigers are offering individual player sponsorship, at £400 including a personalised “special” third jersey with a company name / family name patch, match night announcements, a small advert / logo in the match night programme as well as signed player photo.

See Own & Loan registration page for more details and to register or contact marketing@telfordtigers.net for individual player sponsorship.