Captain Silverthorn is Ruled Out for the Remainder Of The Season! 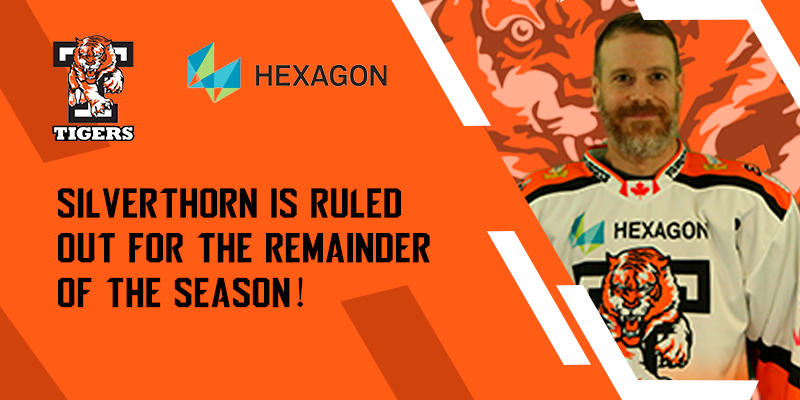 Captain Silverthorn is Ruled Out for the Remainder Of The Season! The Hexagon Telford Tigers can confirm that #22 Club Captain, Jason Silverthorn has been ruled out with injury for the remainder of the 2022/23 NIHL National League season.

Jason, who has been ever-present since joining in the 2014/15 season has led the Tigers to four NIHL league titles, two NIHL Cups and one NIHL North Play-off Title requires hip surgery.

Tom Watkins, Head Coach and General Manager, said, “I am gutted, we have had our fair share of injuries this season and this is gutting.  Silvs has been struggling for months and the problem has become impossible to manage. He’s done a tremendous job playing for the last 3-4 months and has been struggling throughout managing the pain and mobility.  The doctors were very surprised he’d been playing with it for so long, which is a testament to Jason’s professionalism, resilience and leadership qualities.  He leaves a huge hole in our roster”

Discussing his injury Silvs said, “I’ve been battling this for a while now and with the information that I have received this week, it’s the right thing for me to do for now and the future health of my body. I will work to come back; this isn’t the end”

Jason added the following “I am personally devastated, I play because I love the game and to defend our back-to-back league titles, also to have the ability to compete with the guys we have in the dressing room, It’s a special mix of guys, the core I came in with as well as the kids who we have watched and helped grow on and off the ice through the Telford junior system.

He also went on to say “I want to remain an important piece around the dressing room, guiding and leading as well as being a fresh pair of eyes, to help the coaching staff on a game night.”

Hexagon Telford Tigers are actively recruiting a replacement for Jason before the transfer deadline.