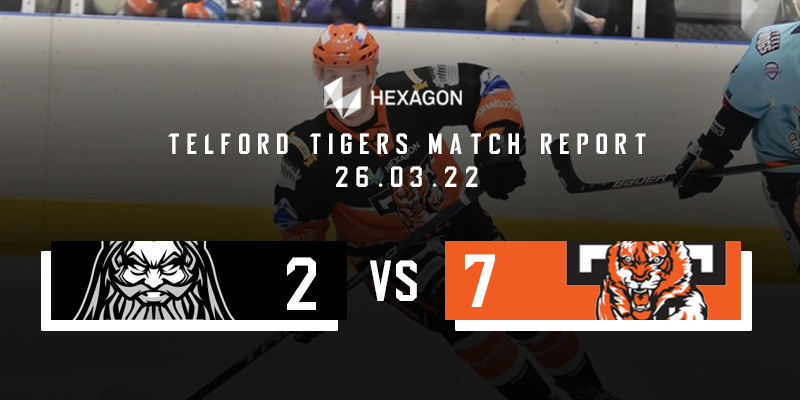 Championship Performance by Title Winning Tigers. Hexagon Telford Tigers travelled to Milton Keynes as NIHL National Division Champions for 2021/22 after a Basingstoke win over Swindon the previous evening left Tigers as league winners without needing to play a game. For the second consecutive year, Tigers win the NIHL National Division. Despite the league’s success, with four league games and the National Cup Final to come ahead of the end of season playoffs, there was still much to play for.

Tigers started the game with only Ross Connolly and Brodie Jesson absent from the lineup.

Telford made the perfect start to the game with a goal in the opening minute. Bayley Harwood sent the puck across the slot to Jack Watkins who fired a shot at the goal which went through netminder Matt Smital and into the net. Tigers had to fight off back-to-back power plays after Andy McKinney was called for tripping and then Thomas McKinnon for hooking. Midway through the second penalty, Tigers broke away and scored whilst short-handed. Joe Aston dumped the puck into the corner of the Milton Keynes defensive zone and Fin Howells was first to the puck and sent it back across goal where Aston timed his arrival perfectly to deflect the puck into the net. Tigers dominated much of the first period and added a third goal on their only power play of the opening period. Adam Laishram was serving a slashing penalty for Milton Keynes when Vladimir Luka passed to McKinney behind the goal. McKinney sent the puck back in front for Howells who hit a first time shot past Smital to give Tigers a deserved three-goal lead.

Telford started the second period under pressure and Milton Keynes looked like a different team. Sean Norris pulled a goal back for the Lightning with a powerful wrist shot that gave Brad Day in the Tigers’ goal no chance. Laishram then hit a shot that went through Day’s legs to score for Milton Keynes. Tim Wallace hit the post shortly after and Day was called on to make a couple of saves from close range. As the period progressed, Tigers got their fluidity going again and a fast break led to a fourth goal. Howells led the break with a pass from centre ice to find Luka skating in on goal. Luka smashed a shot high past Smital to restore Telford’s two-goal lead.

Tigers dominated the third period with some sensible possession play and they took every chance that came their way. McKinney scored the fifth goal with a terrific first time shot after being set up by Howells. McKinney then set up Howells for the sixth goal with a perfectly timed pass from behind the goal to allow Howells to hammer the puck past Smital. The final goal of the game came three minutes from the end. Goodison hit a low shot from the left circle past the screened Smital to round off the scoring and a dominant performance by the league champions.

After the game Head Coach Tom Watkins, commented, “That was one of our best performances of the season. We got a very good start to the game and moved the puck really well. We created a lot of chances and were very clinical in front of the goal all night.  Considering the late night we had before the game, we were aggressive on the forecheck, hunting pucks in pairs and turning a lot of pucks over all night. It was fun to be able to silence a big crowd in their own building.”