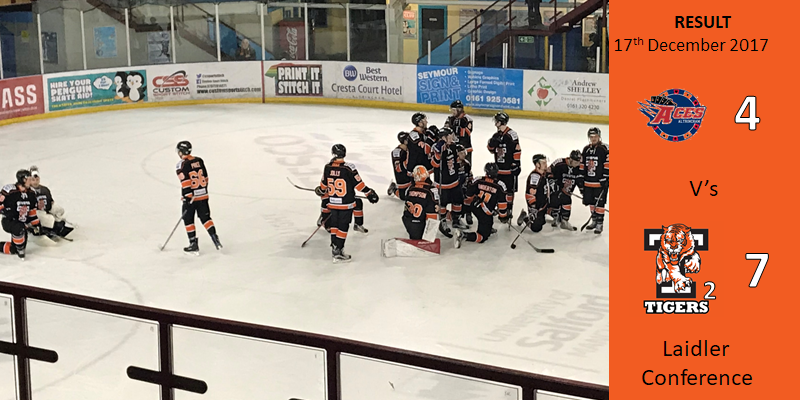 After a weekend of postponed hockey last week due to the snow, the Tigers 2 boys were determined to bring home another 4 points this weekend after victories over Sheffield Senators and Blackburn Hawks a couple of weeks ago.

Sunday 16th December saw Tigers 2 travel away to face Altrincham Aces who are currently fighting with Hull Jets for the league top spot. This game was hugely important for Tigers 2 and despite being short on a few players, player coach Callum Bowley was certain that this wouldn’t hinder the team’s performance.

Once the puck had dropped, there was no holding back for Tigers 2 and an even-handed goal from #72 Callum Bowley assisted by #4 Jets and #66 Price at 1:04 put the Tigers into an early lead!

The Aces responded back to the early conceded goal and managed to equalise the score line 5 minutes later with a goal from Aces’ #71 Cassidy at 6:05. The Aces were battling hard for another goal but a 2+2 hooking penalty for Altrincham’s Joe Greaves saw the Tigers capitalise the powerplay and Captain #4 Karol Jets scores at 15:59.

Shortly after, the Aces were awarded with a penalty shot to which Tigers’ netminder Zack Brown saved! With less than a minute left in the first period, Tigers’ forward #27 Callum Griffin slap shots from the blue line and scores the third Tigers goal at 19:06 assisted by Bowley and ending the period 1-3 in favour of the black and orange shirts.

The puck dropped for the second period and the Tigers created plenty of chances early on with a powerplay goal from defenceman Josh Hustwick, assisted by Jets and Hammerton at 20:52 which put the score line at Aces 1, Tigers 4. Again, the Aces quickly bounced back and Tomas Mitrik scored the Aces’ second goal of the game at 22:18.

The Tigers still showed complete confidence after conceding a second goal with on target shots from forwards Ben Washburn, Charlie Hammerton and newly signed Joe Aston. Smooth passes from Griffin and Hustwick created the perfect set up for Callum Bowley to shoot the puck straight into the top right of the Aces net, scoring the 5th Tigers goal at 25:42.

After the 5th Tigers goal, Aces’ netminder Samantha Bolwell is changed to Nicholas Saxton. With less than two minutes of Saxton being between Aces’ the pipes, #39 Joe Aston scores with a delayed penalty goal at 36:13. This was the last of the excitement for the second period with the period ending Aces 2, Tigers 6.

The third period was the Aces final chance of winning back some goals, and only 3 minutes into the period Mitrik strikes again with his second goal of the game at 43:37. The Aces could feel the heat by now and a 2+10 check to the head penalty for Greaves quickly knocked down the Aces chance of another goal.

That wasn’t the only excitement in the third period, an Aces’ goal at 56:00 put the score line as Aces 4, Tigers 6… only a two-goal lead for Tigers. With only 4 minutes remaining in the game, Tigers needed to keep up the momentum and at 56:16 a scuffle between Tigers’ Anderton and Aces’ Murray paused the game yet again.

With less than 3 minutes to go, the D-man strikes again! Josh Hustwick scores his second goal of the game at 56:16, assisted by Captain Karol Jets and Joe Aston. After an entertaining and action packed third period, the final buzzer sounded with a roaring cheer from the Tigers players and of course the travelling Tigers fans!