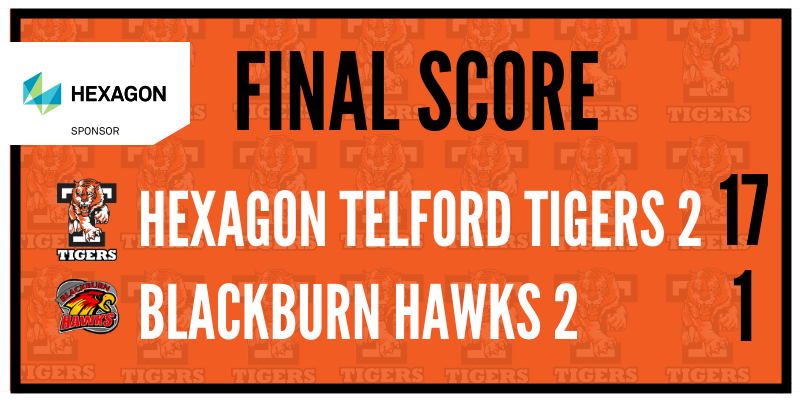 Sunday 16thDecember saw the Hexagon Telford Tigers 2 play their final game of the year against Blackburn Hawks 2. With the Christmas break just around the corner, the focus was all still on winning the game!

The puck dropped for the first period and Telford Tigers were quick to take ownership of the game with an even-handed goal from player-coach Callum Bowley only 1 minute 9 seconds in. This was quickly followed by another even-handed goal from #96 Hammerton, assisted by Plandor and Washburn 3 minutes later.

The game was light on penalties for the first period with only a couple of minor penalties called on the visiting team. Before the period came to an end, #27 Callum Griffin added to the goals giving Tigers 2 a 3-goal lead at the end of the first period.

With the second period underway, it took Tigers 2 until the half way point of the game to find the back of the Hawks’ net again however, Tigers did go goal crazy! A total of 6 goals were scored in three minutes from Bowley, Smith, Washburn, Hammerton and Gordon!

With only 5 minutes to go until the end of the second, Tigers 2 bagged another goal this time from #23 James Callagher, followed by less than a minute later; Hawks’ #33 Ainsworth receiving a match penalty for highs sticks which took #77 Dan Thomason out of the game with a facial injury. The powerplay opportunity saw #27 Callum Griffin bag his second goal of the game at 38:44 – pushing the Tigers into a 11-goal lead by the end of the second period.

The third and final period wasn’t short of goals either! Callum Bowley set the pace again with an even-handed goal at 42:58, assisted by James Smith and Will Reed who was also celebrating his 18thBirthday that day! The Hawks 2 took the break in play opportunity to swap their net minder from Sam Bolwell to Alex Blackshaw.

This was then followed by a hat trick of goals from #94 James Smith, and a second goal for #40 Ben Washburn before defenceman #8 Simon Harrison concluded the Tigers goals with the 17thgoal of the game at 58:23. In the meantime, Tigers’ #13 Conor Gordon received a 2+10-minute penalty for a hit to the head, allowing Hawks 2 get themselves a powerplay goal at 54:59.

The final buzzer went and it was another epic win for the Hexagon Telford Tigers 2. Player coach Callum Bowley commented on the game saying:

“I thought we came out slow in the first period and overplayed the puck a little bit too much, but in the second and third we played more direct and didn’t pass up on good scoring opportunities which made a huge difference. It’s a great way to end the year and we now must take this momentum into the New Year.”

With no further games to play before the New Year. All of the players, staff and match night volunteers from Telford Tigers 2 would like to thank everyone who has supported the team in purchasing the Christmas Jerseys this year as well showing your support at every home game.

We wish everyone a very Merry Christmas and a Happy and Healthy New Year! We can’t wait to see you all again for our first home game of 2019 on Saturday 5thJanuary against Sheffield Senators!