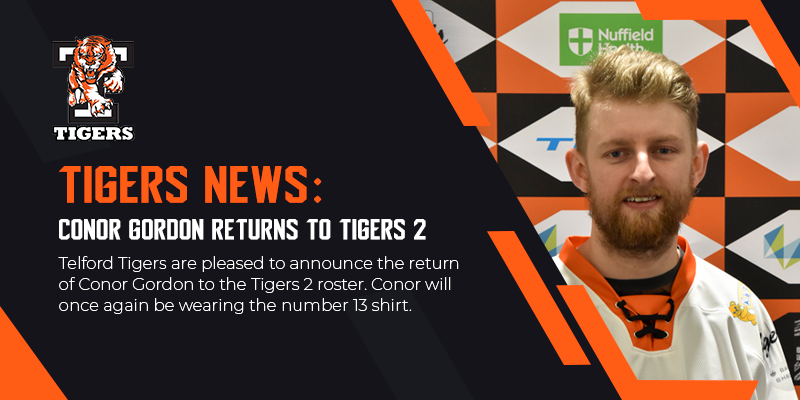 And the players just keep on coming! Telford Tigers are pleased to announce the return of Conor Gordon to the Tigers 2 roster. Conor will once again be wearing the number 13 shirt.

Starting his hockey career with Telford Venom, Gordon has progressed his way through the Telford hockey system appearing on the roster for Telford Trojans, Titans, until finally making his senior debut for Tigers in 2014.

Telford Tigers 2 coaching team Scott McKenzie and Doug Wildman are pleased to have signed Conor for the upcoming season commenting:

“We’re very pleased to have Conor back with us this year. He reads the game well, skates hard and plays physical when it’s needed. Another player prepared to block shots and keep a solid defence. We want to see more composure and control this year from Conor. He is great at joining the play and has a great amount of potential. If we can keep Conor out of the penalty box, he could be one of the best defencemen in NIHL2.”

Conor is looking forward to returning to Telford Tigers commenting;

“Really excited to be re-signing in Telford for another season, with such a great organisation. I’m excited to get the season going after last 18 months and I’m looking forward to seeing what we can achieve this year. I honestly believe we can go all the way…”

Conor’s own and loan shirts are available to order now for £75 each (Home and Away). Please see the Tigers’ Online Shop for details.