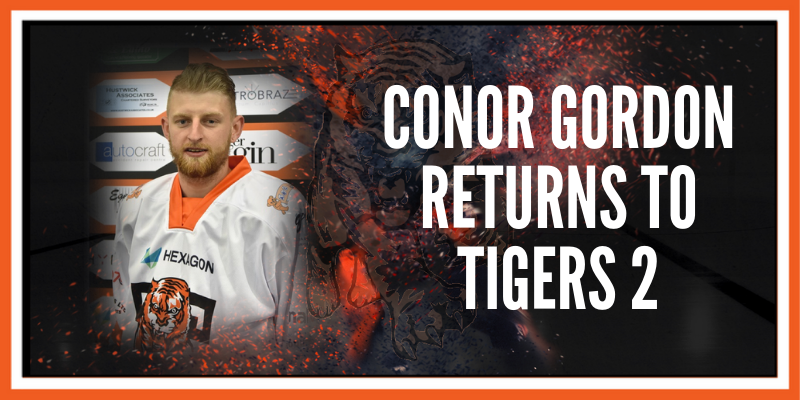 The players just keep on coming! Telford Tigers are pleased to announce the return of Conor Gordon to the Tigers 2 roster!

Conor, 22; is yet again another familiar face in Telford having iced for a Shropshire side since 2009 with the exception of three seasons where the defence-man iced for Solihull Barons and Nottingham Lions. Starting his hockey career with Telford Venom, Gordon has progressed his way through the Telford hockey system appearing on the roster for Telford Trojans, Titans, until finally making his senior debut for Tigers in 2014.

Fielder has worked with Conor in previous years and is looking forward to working with him again this season commenting;

“I’ve worked a little bit with Conor in the past and I’ve always been a big fan of his style of hockey. Unfortunately, with changes to the rule book it means he can’t play the way he which he used to play.

Last season I thought his discipline improved which just showed how well he can play the game. I’m looking forward to working with Conor this and to keep his physical game going but to also keep him out the bin. He’s a young player and still has the potential for development which I’m sure the Tigers fans will see this season.”

When asked about his return to Tigers 2, Gordon commented;

“I’m really excited to get the new season underway with a new coach. We have a solid structure that Bowley has built over the last 2 years and a great bunch of lads so I believe we can really push for some silverware this season; it be will be great year for us!”

Conor’s own and loan shirts are available to order now for £75 each (Home and Away). Please see the Telford Tigers online shop for more details.