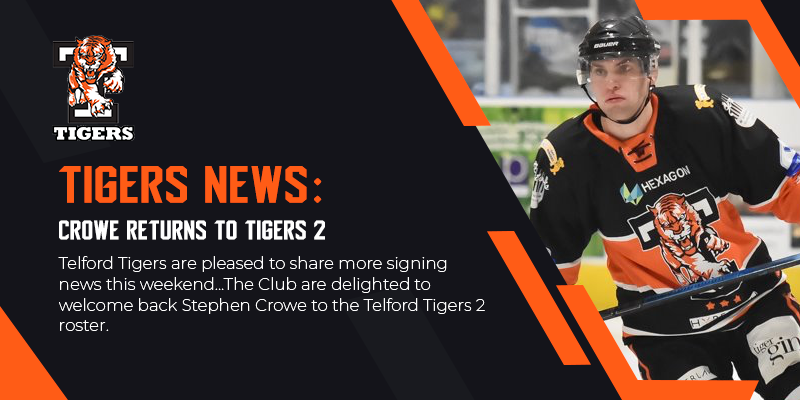 Telford Tigers are pleased to share more signing news this weekend…The Club are delighted to welcome back Stephen Crowe to the Telford Tigers 2 roster.

The 28-year-old has played the majority of his hockey at old time rivals Solihull Barons. Crowe has appeared on several rosters playing out of Hobs Moat Road [Solihull] including; Solihull Sabres, Solihull Knights and of course, Solihull Barons.

The towering defence-man has also iced at Coventry Blaze NIHL, where he even Captained the team during the 2016/17 season. After a short and sweet return to Solihull in 2018, Crowe took a break from the ice where he didn’t play for several months before putting his skates back on and joining the Tigers 2 roster in the later stages of the 2019/20 season. Despite not pulling a Tigers jersey for the full season, Crowe made quite the impression where he earned himself regular ice time and became a solid defence-man which the team could rely on.

Telford Tigers 2 coaching team Scott McKenzie and Doug Wildman are pleased to have signed Crowe for the upcoming season commenting:

“It’s good to see Stephen back with us for another year. He joined us half way through the season so he was slightly off pace, but soon got comfortable. Stephen is a calm defence-man who makes very few mistakes so this year we want more of the same from him. We are sure he will be eager to have the full season and show what he is capable of…”

“After a long break, I’m really looking forward to getting back out onto the ice in a Tigers jersey this season. Looking at the squad and coaching/management team we have this year, I see no reason why we can’t go out there and battle hard for a top spot in the league.

With the right attitude and passion to win, this year’s team really has the potential to have a great season, one which I think will be well worth the watch.”

Stephen’s own and loan shirts are available to order now for £75 each (Home and Away). Please see the Tigers’ Online Shop for details.