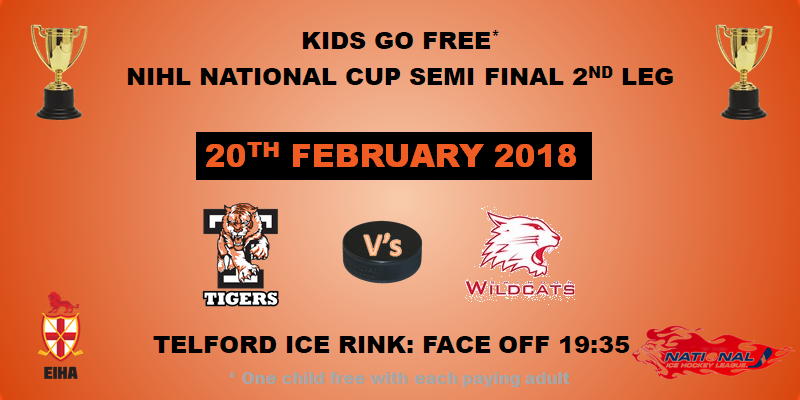 Similar to the quarter finals, the semi-final will be held over two legs with the winner on the aggregate score line going through to the final. The first leg of the tie will be played in Swindon on Valentine’s Day, with the return fixture on the following Tuesday,  20th February at Telford Ice Rink, Face Off at 19:35.

As this is half term week in Shropshire, Telford Tigers have decided to add an incentive to come and sample the atmosphere of an ice hockey cup semi-final, therefore the game against Swindon will also see KIDS GO FREE seating or standing, so anyone under 18 years old will get into the game free with a paying adult! What better way is there to spend a Tuesday evening in half term!

There is no better place than in an full ice rink, watching two very closely matched teams complete for the opportunity to reach a National Cup Competition.

Telford Tigers Head Coach and General Manager, Tom Watkins said “It’s always exciting for players and fans when you get to the latter stages of a competitions. There’s lots to play for, both teams are just 4 games away from picking up some silverware so I’m sure these are going to be high intense games.

We’re very pleased to able to offer this as Kids Go Free game. It’s a great opportunity for everybody to attend the game during the half term school break and enjoy the hockey atmosphere. We look forward to welcoming as many youngsters to the ice rink to cheer on the Tigers in this big game. We’re very grateful to the TJIHC for helping us accommodate this fixture. “