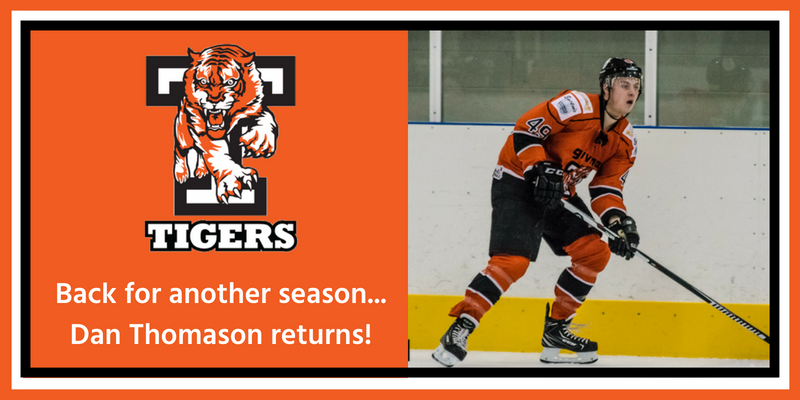 Here we go again! Another player announcement for Tigers 2 today as we welcome back Dan Thomason!

The 24-year-old has played hockey in and out of Telford for the past four seasons. The forward first signed for Tigers NIHL during the 2014/15 season, followed by then icing for Coventry Blaze NIHL for two seasons. Thomason re-joined Telford Tigers 2 last season, where he achieved a personal best in points, which included a goal scored at the NIHL Laidler Playoff weekend.

“I’m pleased to welcome Thomo back for another season. During last season, he grew in confidence, improved his play in all three zones and delivered what was asked of him, week in, week out. He’s got a great attitude, has the ability to put pucks in the net and had a really strong season despite not getting as much ice time as he would have probably liked at times. He came up big for us in the playoffs and proved what he’s capable of, he now needs to kick on and show that level of performance throughout next season.”

Thomason, who will be returning to the senior team for a third season is looking forward to the upcoming season and had the following to say;

“I’m really happy to be back playing for Tigers for the forthcoming season. I learnt a lot of new things from coach Bowley last season, I had the best senior season for points and I am looking to grow on that massively during the upcoming season. There was no doubt in my mind when Callum asked if I would play for the coming season, I can’t wait to get going and finish what we started last season!”

Dan’s #49 own and loan shirts are available to order now for £50 each (Home and Away). Please see the own and loan registration page for more details and to register.