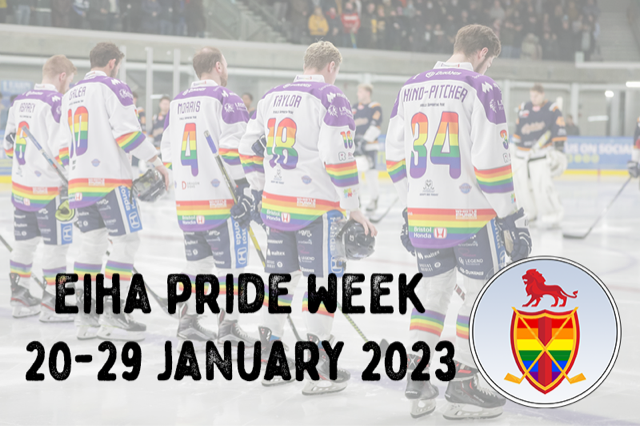 The English Ice Hockey Association is using National Inclusion Week 2022 to announce that its second Pride Week will take place in January 2023.

January 20-29 will be the Association’s time to shine a light on diversity and inclusion, and give everyone in the sport the chance to step up and be an ally.  To be anti-discrimination, anti-racism, anti-homophobia, anti-anything that makes an individual feel uncomfortable.

Clubs in our NIHL and WNIHL with a home game in the Pride Week will designate their individual Pride Nights, other clubs are more than welcome to join in any way they see fit even in road games, training sessions or in-house games.

We will be announcing more information about #EIHAPride23 in the coming weeks, and look out for club announcements about special arrangements they will be making for their own Pride Night.

EIHA media & communications officer Craig Simpson said: “Our first Pride Week earlier this year was extremely well received by clubs, players and fans.  As a starting point we drew a line to say that Hockey Is For Everyone.

“The Association is delighted to be able to confirm its second Pride Week for January 2023.

“Of course in a perfect world we wouldn’t need Pride Week again this year. Or perhaps the first one happened and everything is fixed afterwards and it’s not needed again.  Sadly we know that’s not the case.

“Our sport, our rinks and arenas should be a safe space for anyone to be themselves and not feel threatened in any way.

“We do not condone language or behaviour that targets a person’s sexual orientation, gender identity or other protected characteristic.

“It’s about being an ally, challenging inappropriate behaviour, actions, language.  Showing those people in our sport from marginalised and discriminated groups that ice hockey does care about them.  Show that we want everyone to feel safe being part of the hockey family, whatever role they are undertaking, on or off the ice.”