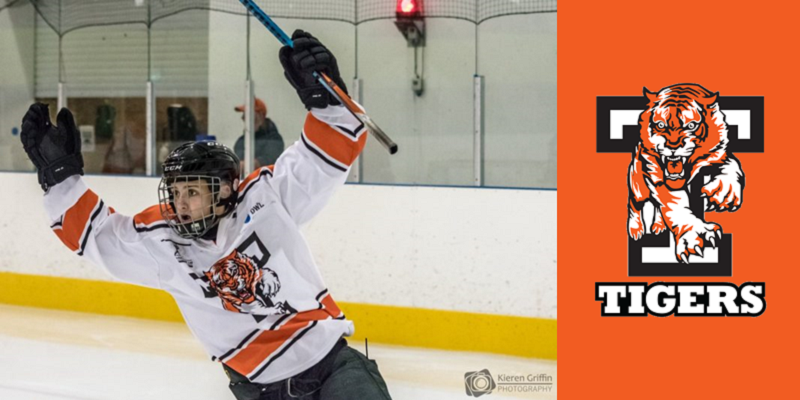 Telford Tigers Under 15 & 18’s Junior player Sam Watkins has been appointed as Captain of the England Under 15’s Team, who travel to Bratislava, Slovakia, on Monday.

The Madeley Academy pupil said “I’m delighted to make the team and to be selected as Team Captain was a surprise, I’ll be very proud to wear the ‘C’ for England. I’m currently Captain of the Telford Under 15’s and I’ll try to use that experience to do whatever I can to help my team and encourage my teammates on and off the ice.” Sam was informed on Friday evening whilst attending a pre-trip challenge game in Romford against the South West Conference Under 17’s.

Sam has a unique story and at just 14 years old has had to overcome some very big challenges. He was diagnosed with a serious Heart Defect at birth, but also suffered serious injury, twice! Sam’s dad is Tigers GM & Head Coach, Tom Watkins, who is clearly delighted for his son, “Sam has a truly inspirational story and for those that know him, they know how much he has been through, the knocks this kid has had have severely tested his character. We were told at birth he wouldn’t be very active, would lack energy due to his heart condition, which restricts his cardiovascular system. He’s undergone numerous surgeries including two major open heart operations. To put Sam’s condition into perspective prior to his heart surgery in November 2013 he couldn’t walk 4 holes on a golf course! Following his recovery from surgery and heading into the start of the hockey season in 2014 he broke his leg playing Football. We couldn’t believe the bad luck, but there was worse to come. After recovering from his first broken leg he returned to the ice and in his first match back with only two minutes two go he suffered a another break, this time more severe which required more surgery. Combining the heart surgery and broken legs he probably missed nearly two seasons. Physically and mentally that was extremely hard on us as a family and of course Sam, he already struggled with conditioning but as anyone would when injured, he gained a lot of weight. He had a really tough battle to regain fitness, he’s been to hell and it’s been a very tough process for him but has shown a ton of courage, dedication, perseverance and passion to overcome all the challenges he has faced along the way. I’m sure everything he has been through has made him even more driven and focused to reach his goals. As his Dad I couldn’t be prouder of him, the way he has dealt with so much adversity at such a young age really is amazing and somehow he always had a positive outlook. It would have been far easier for him to quit than to persevere. He is an inspiration in my eyes and all of his family are so proud of who he is and what he has achieved.”

Sam, who has been training with the Tigers D1 Team this season under the watchful eye of Coach Watkins went onto say, “as his coach I really enjoy coaching Sam, he is a smart player. He has good leadership qualities and is an excellent captain for the Tigers Under 15’s team, he works hard, sets a good example for his teammates, is a good communicator and will put the team first. He gets no favours from me at the rink, he must be coachable, must be a good teammate and earns every opportunity he has had.”

“I’d also like to congratulate all the Tigers Juniors who will be travelling to Bratislava next week. I’m sure Brodie Jesson, Will Reed, Alex Blake, Grace Garbett and Sam will do Telford Hockey proud. They are all great kids and I’m pleased for them. I’d also like to wish Saffron Allen, our physio, good luck as she travels with the GB Ladies team to Slovenia.”

ENGLAND: leadership groups for Bratislava confirmed; one change for U19 squad