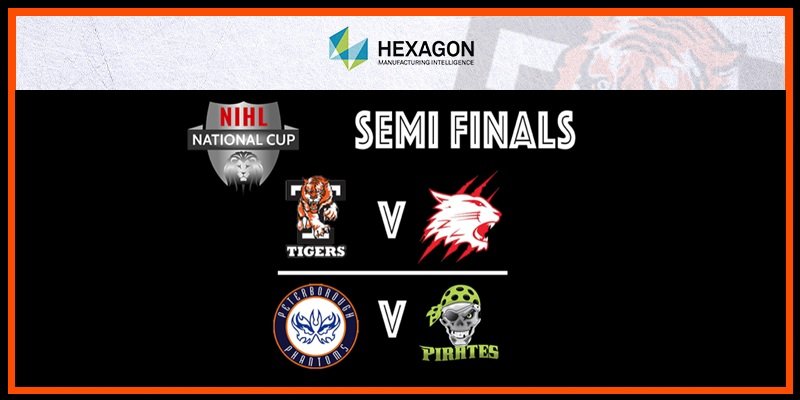 First plays second in National Cup Semi-Finals. The semi-final of the NIHL National Cup will see the top two sides in the league going head to head in the quest for the first silverware of the season.

League leaders Telford Tigers also finished atop the qualifying group in the Cup competition and under the rules of the competition were able to choose who to face in the final four.

Tigers’ coach/GM Tom Watkins announced that his side would take on the Swindon Wildcats who were second in qualifying and also currently second in the league table.

Peterborough Phantoms and Hull Pirates will face off in the other semi-final, with the two-legged ties scheduled to be completed by the end of January.

The NIHL are pleased to confirm the dates for the Telford-Swindon tie.

Swindon Wildcats are at home first on Thursday, January 16th, face off at 7.30 pm.  Ticket information will be released on swindonwildcats.com.

The second leg at Telford Tigers is on Wednesday, January 29th with a 7.45 pm faceoff.  Details on ticket sales will be available on telfordtigers.net.

Dates for the Peterborough-Hull tie will be confirmed in the next few days.

Hexagon Telford Tigers 1 will next be in action at home on Sunday 29th, December against Milton Keynes Lightning. Match Night tickets available to purchase here!