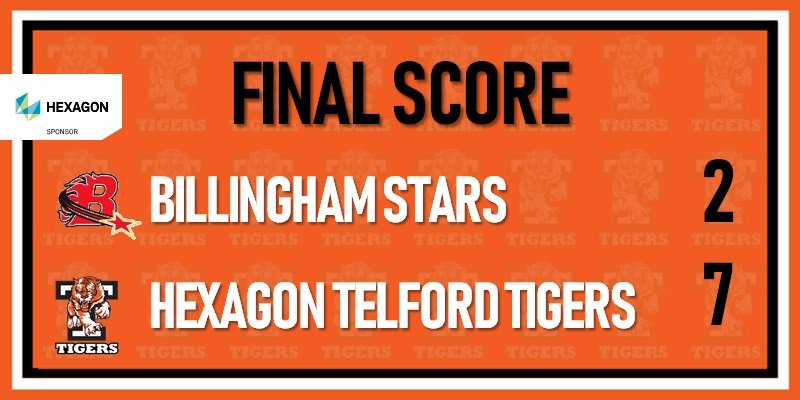 Hat Trick Hero McKinney Stars in Tigers’ Victory. The Hexagon sponsored Telford Tigers 1 travelled to Billingham on Saturday night to take on the Billingham Stars. Tigers started the game at the top of the table and faced off against Billingham who were in 9th position, just a point and a place off the all important eighth place for playoff qualification.

Tigers had won all three previous league games against the Stars this season scoring a total of 26 goals in those games.

Tigers coach Tom Watkins had commented earlier in the week about the progress of the team so far this season, “The team are currently sitting in first place of the Moralee Division, with a small advantage of one point separating us from second place Sheffield Steeldogs and two points from third place Hull Pirates. All have played 25 games in the league and, with several games still to play against the Steeldogs and Pirates, there is sure to be an exciting finish to the league schedule.”

Tigers lined up without Dan Mitchell and Corey Goodison but welcomed back Joe Hazeldine. In goal for Telford was Tom Hovell and for Billingham James Flavell.

The first period was one for Tigers to forget. Despite having plenty of shots at Flavell, none went in. In the 16th minute of the period, Billingham took a shock lead through Kristers Bormanis, a lead they held at the end of the period.  Tigers used the break to their advantage and equalised in the 24th minute when captain Jason Silverthorn was set up by Ricky Plant. Tigers were then given a great chance to take the lead when Billingham’s Michael Bowman was given a slashing penalty. However, a breakdown at the Tigers’ blue line gave Billingham’s Craig Thurston a short handed chance which he scored to put Billingham back into the lead.   Tigers were then handed another power play chance when net minder Flavell was deemed to have committed a delay of game penalty. This time Tigers took full advantage of the extra man with Scott McKenzie scoring to level the game. Tigers then scored two further goals in just eight seconds! Both goals were scored by Andy McKinney and both were set up by Silverthorn. Tigers remarkably going from a 2-1 deficit to a 4-2 lead in twenty four seconds. Tigers continued the scoring as the period came to an end with McKinney completing his hat trick in the 32nd minute for Tigers’ fifth. McKinney’s three goals being scored in just two minutes and thirty three seconds. The final goal of the period belonged to Tigers’ Jonathan Weaver whilst on another power play. Weaver’s goal giving Tigers a 6-2 lead at the end of the second period.

Tigers controlled the third period and sealed the victory in the 58th minute when Silverthorn scored his second of the night from close range. Tigers’ win maintains top spot in the league, a point ahead of Sheffield Steeldogs.

After the game coach Tom Watkins commented, “I thought we had a decent start, created a lot of chances and were aggressive on our forecheck. We fell behind in the main due to some outstanding goal keeping from James Flavell. He was equal to everything we shot at him and credit to Billingham they worked extremely hard and I was particularly impressed with their younger players.” Watkins added, “Andy McKinney grabbed the game by the scruff of the neck and turned the game on its head in the space of a few minutes. He was a real leader tonight, came up big and scored a natural hat trick (when a player scores three consecutive goals, uninterrupted by any other player scoring for either team), which created some daylight between the two teams, allowing us to take control and find a way past their goalie.”

Hexagon Telford Tigers 1 return to play at Telford Ice Rink Sunday 10th February 2019 at 18:00 in the NIHL Moralee Conference against Solway Sharks. Hexagon Telford Tigers 2 are next in home action at Telford Ice Rink on Sunday 24th February 2019 at 18:00 in the NIHL Laidler Conference against Blackburn Hawks 2. For details of all future fixtures, check out the Tigers fixture list and www.telfordtigers.net/tickets for ticket information.