Hawks Swoop To Shoot Out Win Against Tigers 1 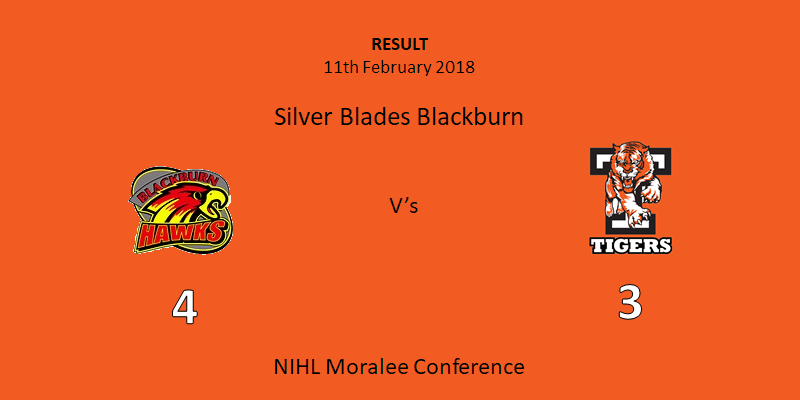 Telford Tigers 1 played the second of back to back road trips on Sunday night as they visited Blackburn Hawks in the NIHL Moralee Division.  The last time Tigers had played at Blackburn Arena they had won 3-0 on the night, but the result was overturned and Tigers lost the points due to not having the required bench coach.

Tigers had won convincingly against Billingham Stars on Saturday to retain their lead at the top of the table.

Blackburn took the lead in the 22nd minute when Tigers, despite being on a power play, failed to press home their advantage and Blackburn’s James Royds scored short handed. Things got worse just 2 minutes later when Mathew Viney scored to give Blackburn a 3-1 lead.   Tigers pulled a goal back with Jonathan Weaver’s precise shot in the 30th minute and ended the period 3-2 behind.

Tigers and Blackburn exchanged chances in the third period with Tigers pushing for an equaliser and Blackburn looking to catch Tigers on the break. It was Tigers who got the goal in the 55th when Goodison’s shot beat Blackburn net minder Niks Trapans to tie the game.  No further goals were scored in regulation time and 5 minutes of overtime was played but the sides were still level at the end and the points would be decided by a shoot out.  Scott McKenzie missed the first Tigers’ shot, with Bentham scoring for Blackburn. Silverthorn then missed Tigers’ second shot leaving Royds to win the game after he beat Tigers’ net minder Dennis Bell with his wrist shot.

Man of the Match – Warren Tait.

After the game Coach Tom Watkins said, “ I was disappointed with our performance tonight and disappointed to lose but I was pleased to get a point as, for long periods we didn’t look like we were going to get any at all.” Watkins added, “I’d rather look at this as a point gained than a point lost as we have more big games against our rivals to come and the point tonight could be very important.”