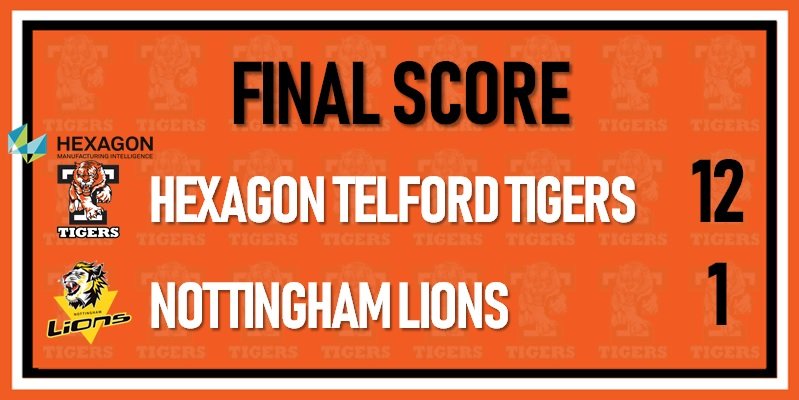 Hexagon Telford Tigers 1 roar past the Lions as they opened their NIHL Moralee division campaign with a comfortable 12-1 win over Nottingham Lions at Telford Ice Rink on Saturday night. Icing for Telford were new signings – Tom Hovell, Andy McKinney and Joe Hazeldine.

Tigers lined up for the game with Hovell in goal, playing against his old team.

Tigers got off to the perfect start, opening the scoring in the 2nd minute when Scott McKenzie played a pass from behind the goal for McKinney to score from close range. A 2nd goal followed shortly after, when Jason Silverthorn tapped in from almost on the goal line after the Nottingham net minder had lost sight of the puck. The period saw a number of penalties for both sides and some sloppy play, but Tigers added a 3rd goal in the 18th minute, Silverthorn scoring his 2nd of the game, picking up a rebound to fire home. Tigers finished the period firmly in charge when Adam Taylor burst into the Nottingham zone and hammered an unstoppable shot into the bottom right hand corner to give Tigers a 4 goal advantage.

The 2nd period continued in the same vain with Silverthorn hitting the crossbar and then the post and Joe Aston hitting the post shortly after. Midway through the game Tigers scored 2 goals in 2 minutes to take the game beyond Nottingham. Weaver added the 5th goal with a shot that deflected off a Nottingham defender’s skate into the net and Jed Moreland finished off a neat passing between Weaver and Silverthorn for the 6th.

The 3rd period saw Tigers score 6 further goals. Brodie Jesson led a 2 on 1 breakaway and passed to Dan Mitchell who finished with a precise wrist shot. Straight from the face off Joe Aston passed to Silverthorn in space and the Captain completed his hat trick with a shot that went through the legs of the Nottingham net minder. Tigers then benefitted from a slice of luck to get their 9th goal. Aston’s cross ice pass was meant for Silverthorn but he slipped over, wrong-footing the defence, allowing Ricky Plant to score. Tigers then conceded a goal after a mistake by Danny Rose allowed Ruskin Hughes to skate in on goal and shoot past Hovell. The goal fest continued shortly after when Jack Watkins hit a powerful shot from the blue line that went in off the bar. Hazeldine then scored his first goal for the club with a neat wrist shot after being sent clear by Silverthorn. The 12th and final goal was scored by Aston with a good finish from Henry Adam’s pass.

After the game Coach and General Manager Tom Watkins said, “ It was good to get the rust off and play with a good intensity for 60 minutes. We have lots to work on and improve, but overall I was very happy with how we looked tonight, we had good balance on the lines and I felt we moved the puck well in our first game. There was a good spread of scorers throughout the line up which is always good.”

Hexagon Telford Tigers 1 next play at Telford Ice Rink at 19:00 on Saturday 8th against Whitley Warriors.  For details of all future fixtures, check out the Tigers 1 fixture list.