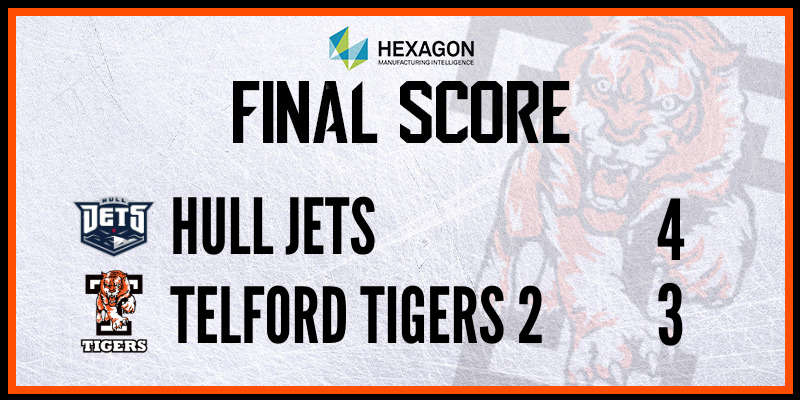 Hexagon Telford Tigers 2 took their first trip of the season up to Hull on Saturday night where they were guests of Hull Jets.

Tigers 2 travelled lightly, icing a roster which was missing some key players due to work and work commitments; Supa, Griffin and Stanton to name a few. Defenceman Connor Keyes was also still unavailable to play as he tallies up his fifth game of his ten-game suspension following the disciplinary review from the Dragons fixture back in September.

A similar start to the previous weekends’ game saw Tigers 2 concede yet again in the first minute of the game; this was shortly followed by Jets’ second goal of the game at only 1 minute 30 seconds.

The period didn’t improve much on the goals front for Tigers 2 when Jets’ Robinson managed to find the back of the Tigers net with their third goal of the evening in the 13thminute. A mediocre first period ended in the Jets’ favour, three goals to nil.

The puck dropped for the second period and to add more to the Tigers’ frustration, another conceding goal put the hosts in a four-goal lead having played the best part of only 20 minutes of game time. Tigers continued to apply pressure on the Jets and the hosts finally cracked when Anderton came through with an even-handed goal in the 33rdminute from Jolly and Price.

More action appeared in the period when Jets’ Cobley and Tigers’ Reed found themselves in a little altercation, resulting in them both being penalised for a 10-minute misconduct penalty. There were no further goals from the second period meaning Jets’ still had a solid three goal lead though despite the score line, Tigers 2 demonstrated much stronger play in the second period.

The third and final period almost saw the game come down to the wire; 4 minutes into the period and defenceman Hustwick added to the scoreboard with a sniper shot from the blueline. This was then followed by a third Tigers goal from youngster Liam Bartholomew, still with 10 minutes to go.

The final 10 minutes of the game were by far the tensest, with Tigers trying to find the equaliser and Jets’ looking to secure the win. A timeout for Tigers and a netminder pull were all a part of the visitors’ game plan to try and find the equaliser and although Tigers came through with plenty of goal attempts from Washburn, Jolly and Hunt; none could succeed.

The final buzzer sounded and it was a substandard result for Telford Tigers 2 as a 4-goal deficit comeback was within touching distance. The win for Jets sees them take second place in the league table, one point ahead of Tigers 2.

Man of the match: Will Reed

“Hull away is a difficult task at the best of times but we disappointingly gave away a 2-goal head start to them within the first couple of minutes. With their third goal, they looked to be easing away from us without a fight.

Despite a good team talk and some slight changes, Hull grabbing another goal within 40 seconds made the uphill climb that bit more tasking now we were facing a 4-goal deficit. The lads mustered up some effort and team spirit after conceding the fourth goal and started to get back into the fight.

We came out looking like a completely different team for the third period, finally showing our teeth scoring a further 2 goals and took the game to the Jets for the whole period but just couldn’t find the equaliser. Some stand out performances in the third but we can’t give teams a 4-goal lead and expect to win games.

Next week we play them again at home and we have a couple more players available and look forward to starting as we left off on Saturday night.”