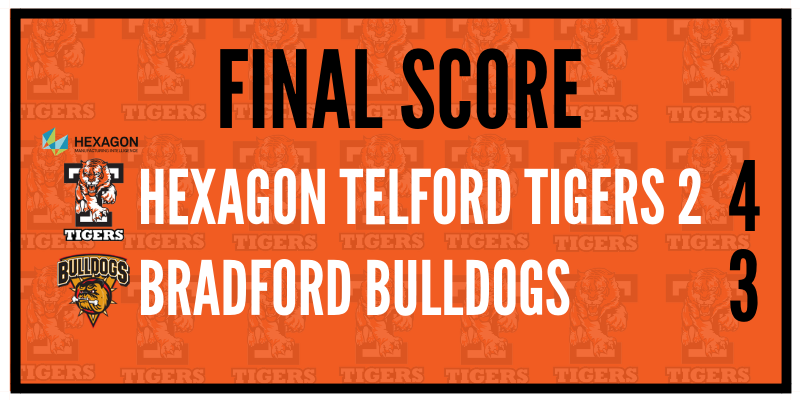 On Sunday 28thOctober Tigers 2 took on Bradford at home.

Coming off an unfortunate loss the day before the Tigers looked relaxed during warm up.

The first period saw the Tigers take control of the game, their dominance showed with three goals in 5 minutes, #96 Charlie Hammerton, #36 Henry Adams and #89 Lubomir Plandor all turning the goal light red, much to the delight of the Telford fans.

Cairney-Witter and #29 Connor Keyes had a few fisty cuffs towards the end of the period, when the buzzer sounded the Tigers found themselves 3 nil up.

The second period saw both sides equally matched, the Tigers were unable to make the most of the Power Play advantages. Good saves from both goalies saw the score unchanged at the end of the second.

Bradford dominated at the start of the third period, some poor defending from the Tigers allowed Bradford to even the score to 3-3 within the first nine minutes of the period. The Telford Bench called a time out after the third goal, and the lads came back out more focused.  With I minute left #96 Charlie Hammerton scored again. Bradford favoured an empty net and tried hard with 6 skaters to even the score, but the Tigers boys were having none of it.  The game finished with a 4-3 win and a three-point weekend.

“I was pleased to see how we came out in the first period against Bradford, we played with speed and with a point to prove. We set the tempo early on in the game and put Bradford on the back foot. We just got too complacent after finishing the first period 3 goals up, we thought we had the game in the bag and nearly threw it away.

Luckily we managed to get a huge goal at the end with a minute to go, but we shouldn’t have ever put ourselves in that position. We need to learn to see out games much smarter than we’re currently doing and it’s up to us to make sure we don’t let off when we get a strong start.”