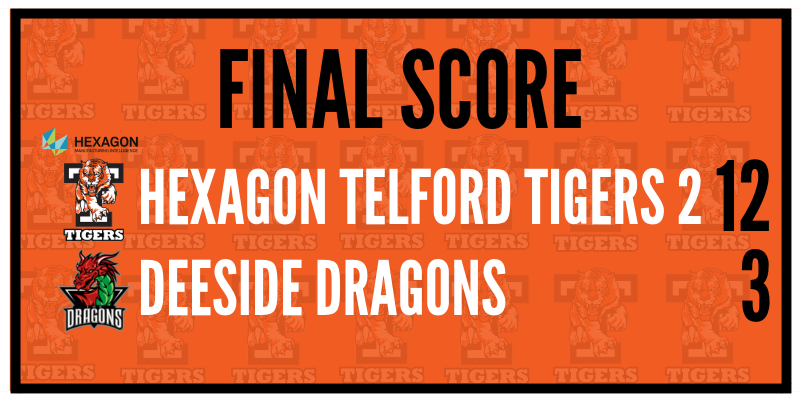 On Saturday 22ndSeptember, Tigers 2 started their league campaign, playing Deeside at home in front of a good-sized home crowd.

The game started well with both sides playing some good hard-hitting hockey, but it was the Tigers who drew first blood with a goal from Charlie Hammerton 1:57 seconds into the period. Penalties from Deeside saw Tigers 2 Captain Karol Jets able to put the Tigers 2 up, by scoring a power play goal. Penalties from both sides saw Deeside claw a goal back with 33 seconds left in the first period with a delayed penalty goal.

Their celebration was short lived, with five seconds of the period left #94 James Smith hammered one home, ending the period with the Tigers 3-1 up.

Deeside’s Owen Bennett tried hard to start a fight with #29 Keyes, but the experienced defender kept his head and his mind on the task in hand.

The second period was feisty, with both sides stacking up penalties for roughing and late hits. #89 Plandor, and #94 Smith scoring in the first half of the second period. Bringing the Tigers to a comfortable 5-1 lead half way through the game.

A scuffle in front of the Tiger’s net and some confusion from the Refs, resulted in #6 Reed and #13 Gordon being sent off for roughing, Gordon was then brought back on, Reed was brought back on and Gordon was eventually sent off with a match penalty for head butting. Thirty seconds later #72 Callum Bowley joined the penalty box after a hooking call. This left the Tigers defending a three on five penalty kill. Deeside were unable to capitalise on the advantage and when the Tigers were back to full strength #2 Rhys Howells snuck one in around the back of the Deeside Goalie.

The end of the period saw the Tigers leading by 6-1.

The third period saw both sides change goalie, #41 Zac Brown stepping down to give #3 Ollie Johnson some valuable game time.  Deeside changed their goalie back to Armstrong pretty quickly after #59 Jolly let 3 goals in from 4 shots and walked off the ice.

Will Reed scored 1:56 in to the third period, followed by a goal from #36 Henry Adams less than a minute later. James Smith completed his hat trick, goals from #27 Callum Griffin and #40 Ben Washburn made it 11 – 1 with ten minutes to go.

#66 Matt Price was presented with the Man of the Match award after a solid performance.

“Tonight was a great all round team performance, everyone bought in and put in a solid shift which was great to see. I thought we were smart in possession of the puck, created good scoring opportunities, had plenty of secondary scoring, were great on the penalty kill and kept Deeside’s scoring opportunities to a minimum. They only had opportunities when we switched off. We have to maintain and build on that performance against Deeside, as I think we are capable of stepping it up another gear. “

The Hexagon Telford Tigers 2 are back in action on Sunday 23rd September where they will face Altrincham Aces for the first time this season.