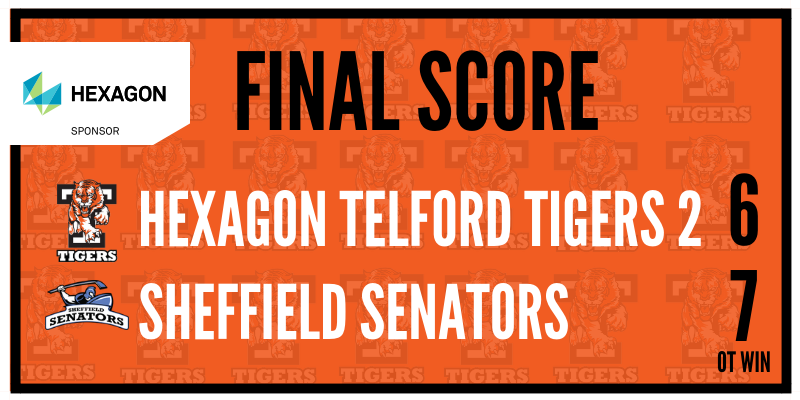 Hexagon Telford Tigers 2 suffer first overtime loss of the year. Saturday evening started off with only the Tigers on the warm up as the Senators coach took a slight de-tour with the sat-nav, however, the Sheffield side made it just in time for face off.

The Tigers started aggressively with #66 Matt Price hitting the post after 25 seconds, followed by a good save from the Sheffield keeper twenty seconds later when #8 Simon Harrison took a shot on goal.  At 5:58 #27 Callum Griffin opened the scoring with Power Play goal assisted by #66 Matt Price and #96 Charlie Hammerton.  Two minutes later the Senators evened the score, the period looked like it would end at 1-1 when #72 Callum Bowley found the back of the net assisted by #36 Henry Adams and netminder #41 Zack Brown at 19:28

The second period saw some end to end fast hockey from both sides, The Tigers made it 3-1 when #72 Callum Bowley tipped the puck into the net after a nice shot on goal by #66 Matt Price.  Sheffield scored a power play goal, the only goal for them in the second period at 28:58. A strong Tigers side dominated the second period with a shot from the blue line from #72 Callum Bowley, Tipped in by #75 Liam Preece and a goal from #54 Finley Howells, his first senior goal. The period ended with the Tigers winning 5-3.

The third period went very wrong for the tigers, allowing Sheffield to battle back scoring 3 even handed goals.  #27 Callum Griffin scored his second goal of the night at 46:19 but it wasn’t enough to stop the game going to overtime.

Both teams battled in overtime and the Tigers were unlucky when the Sens scored at 64:28 making the final score 7-6 to Sheffield, with the Tigers taking one point away from the game and staying in 4 place in the league

“I thought we were very much in control of the game at the end of the second period despite not playing our best hockey, then we switched off in the third period as we thought we had won the game and didn’t have to compete. We have to learn from it and not allow teams to come back from four goals down to take a win, it’s unacceptable and the guys know that. We have to be ready next weekend as it’s another tough test.”