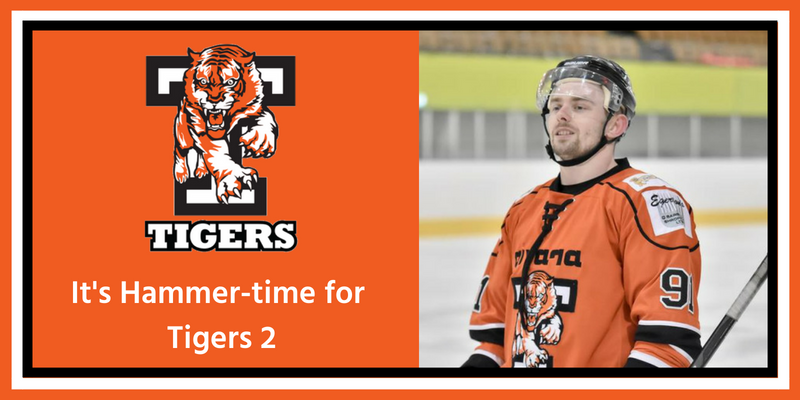 Telford Tigers 2 are delighted to announce the return of forward Charlie Hammerton. The 25-year-old has predominantly progressed his hockey career in Solihull, appearing on the rosters for Solihull Barons and Knights and is also no stranger to NIHL hockey either; having played senior hockey for both Solihull Barons and Coventry Blaze NIHL before making his debut in a Tigers jersey last season.

Hammerton has come off what has been a great 2017/18 season for Tigers 2 accumulating an impressive 65 points; and has become an all-around key player on the Tigers 2 roster.  Tigers 2 player coach Callum Bowley was impressed with Charlie’s ability last season commenting;

“It’s great news to have a player like Charlie back on board. He is a versatile player who can jump between playing as a defenceman or as a forward. At times, last season he had to cover in defence and did an awesome job, but for this upcoming season I want to see him focus purely on playing forward as that is where he’s at his best.

I was quite impressed with his performance levels last season and his ability to create good offence when he’s on the puck. He shoots very well, finishes his hit, is vocal in the dressing room at the right moments and is an asset to have on the powerplay. I can see him having a big year for us.”

Hammerton, who will be returning to Telford Tigers for a second season had the following to say about his return;

“I’m pleased to be back with the tigers. I feel very confident that we can challenge for some silverware this season and build on the second half of last season where we did nothing but improve after a slow start. Looking forward to getting going again!”

Charlie’s #96 own and loan shirts are available to order now for £50 each (Home and Away). Please see the own and loan registration page for more details and to register.