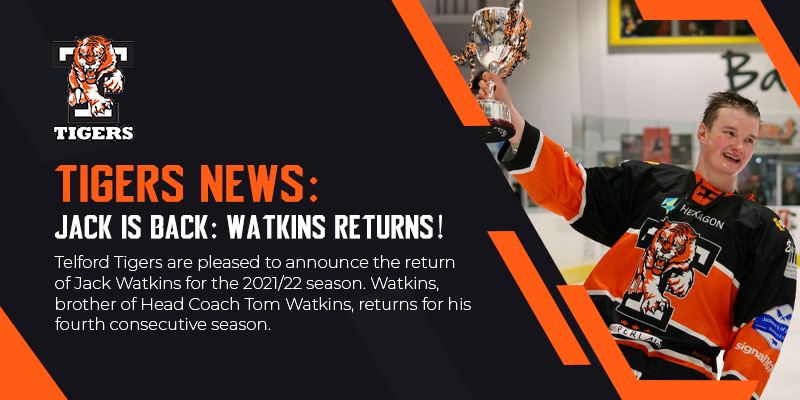 Jack is Back: Watkins Returns! Telford Tigers are pleased to announce the return of Jack Watkins for the 2021/22 season. Watkins, brother of Head Coach Tom Watkins, returns for his fourth consecutive season after being a key part of the team during the NIHL League and Cup double-winning team scoring 26 points. Jack will wear the number 93 shirt.

Watkins stated, “It’s a pleasure to be back in a Tigers Jersey for another season. After the way the last season ended, we’ve still got unfinished business to attend to and eyes solely focused on that treble! The team is shaping up nicely with a mixture of returning players and new faces in the locker room, it’s been a strange 18 months and I can’t wait to get going.”

Tom Watkins, Head Coach and General Manager, said, ”It was another easy to decide to sign Jack for the forthcoming season. During our last season, Jack was one of the stand out players and took his game to a new level. He played at centre for much of the season and this was a position he grew into, scoring some big goals for us. Jack showed how good the physical side of his game is and he can change games with the level of his performance. The one area of his game I expect him to improve next season is his points tally and I am confident with his ability he will be able to do that.”

Telford Tigers would like to thank Oscar Turner who has agreed to continue as Jack’s personal sponsor.

Jack’s own and loan shirts are available to order now for £100 each (Home and Away). Please see the Tigers’ Online Shop for details.