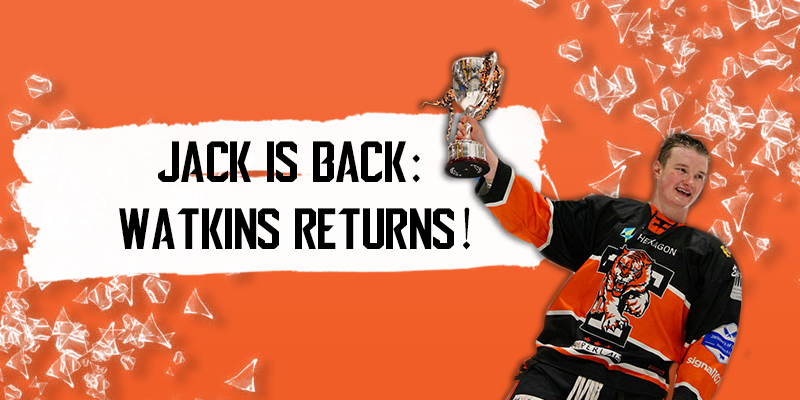 Telford Tigers are pleased to announce the return of Jack Watkins for the 2020/21 season. Watkins, brother of Head Coach Tom Watkins, returns for his fourth consecutive season after being a key part of the team during last year’s NIHL League and Cup double winning team scoring 26 points. Jack will wear the number 93 shirt.

Watkins stated, “I’d like to start by wishing everyone well in these awful times. I hope we are all staying safe and taking care of your families, neighbours and loved ones. Since joining the club for a season in 2011/2012 and then returning a few years later, I’ll be looking at my fifth season with Telford (fourth consecutive), and when each season ends, it’s a no brainer for me when choosing a team to play for in the coming season. Telford has been like a home away from home for me so making the decision to sign back is a simple one. Not only have I been lucky enough to witness a championship squad evolve over the last few seasons here in Telford, I’ve been able to compete, develop and win as part of that team and, for any hockey player, there’s no better feeling than winning. We achieved an unforgettable milestone last season in regards to my personal career – we won the double. Unfortunately, as we are all aware, we weren’t able to battle our way through the playoffs and take home the treble, so I can speak on behalf of every returning team member and the new ones we welcome in September, we’ve got a treble to win! I can’t wait to get started and hope to see you all at the first home game.”

Tom Watkins, Head Coach and General Manager, said, “I’ve coached Jack now over a number of years and obviously followed his game for a long time. Last year he played his best hockey by miles. He performed at a whole new level in my opinion, he was fit, strong, physical and moved his feet way better than I’ve seen him. We moved him to centre early in the year and he really excelled in that role, showing great leadership and played very responsibly in the defensive zone. He had some excellent performances and scored some big goals for us. He can play in all situations and compliments the rest of the line-up very well. When Jack’s on his hitting game it really lifts the bench, the boys feed off that and can help change the game. I’m again expecting that level of performance but think he can still add some numbers to his game with his overall level of ability.”

We would also like to thank Oscar Turner who has agreed to be Jack’s individual sponsor for a further season. Jack’s own and loan shirts are available to order now for £100 each (Home and Away). Please see the Tigers’ Online Shop for details.