Jets leave it late to shoot down Tigers 2 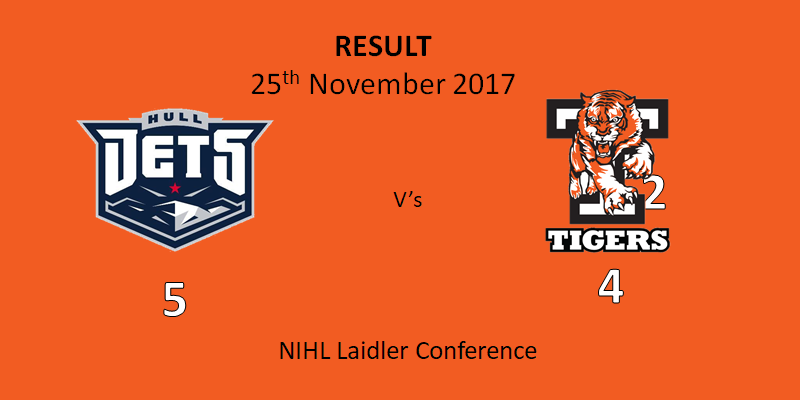 Telford Tigers 2 took a road trip to Hull on Saturday night, for their third encounter with the Jets.

Tigers 2 started the first period by chasing the Jets and found themselves a goal down within the first 3 minutes of the game with Hull’s Gowan Beddoes scoring a power play goal at 3:14. Tigers 2 battled on to try and even out the score line but another Jets goal at 16:02 settled the period in favour of the Jets. The first period of the game saw 20 shots on Tigers netminder Zack Brown and only 7 shots on Hull’s Dean Bowater.

After a disappointing first period, player coach Callum Bowley was determined to bite back and second period had a heated start with Hull’s Captain Jamie Lewis receiving a 2+2 Penalty for roughing and slashing and our own Tigers Captain Karol Jets receiving 2 minutes for roughing. The Tigers put on the pressure for the remainder of period 2 with James Smith picking up an even-handed goal at 29:31.

The Tigers were owning the second period and just 31 seconds later and a second even-handed goal was scored by yet again James Smith on the 32-minute mark, assisted by Liam Preece and Karol Jets. The Tigers battled hard to secure another goal in the period but a Jets short-handed goal at 38:12 tamed the Tigers once again. The Jets still couldn’t scare off the Tigers and shortly after managed to get the puck in the Jets net with a power play goal at 38:53 from Charlie Hammerton. The second period ended with an equal score line, 3-3.

The start of the final period saw a fast-paced battle to get the winning goal. Tigers 2 continued to work hard and a 2-minute hooking penalty for Hull’s Captain saw the Tigers take advantage and the lead with another power play goal from Hammerton at 44:16. Hull Jets quickly responded to the conceding goal and the score was yet again equalised at 45:58 with an even-handed goal from Jets’ Kieran Beach.

As the period started to wrap up, both teams were battling hard for the win. The final few minutes of the game were the tensest yet! With scoreboard showing a draw, spectators prepared themselves for the game to go into overtime… There was no stopping the Jets and a last-minute hat trick goal from the Jets Captain saw the host team take the lead only 41 seconds left on the clock.

Tigers 2 weren’t giving up and worked solidly for the final few seconds of the period to try and get another goal but didn’t manage to succeed.

The game ended in a 5-4 victory for Hull Jets.

Man of the match – Charlie Hammerton