Joe does his bit for Movember 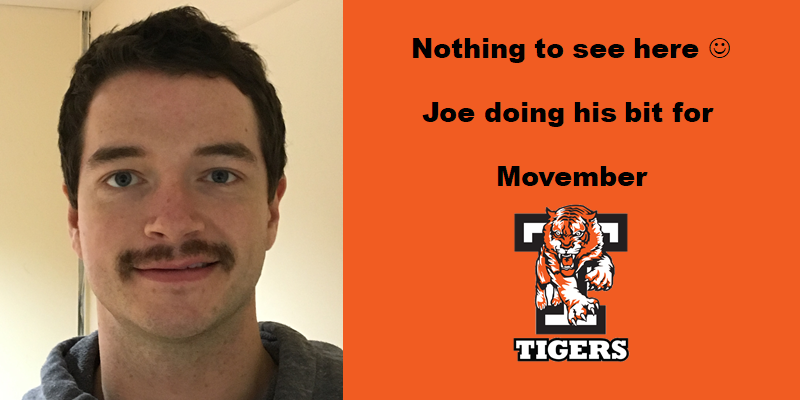 You might have noticed Joe Miller is looking a bit different at the moment – because he’s been growing a moustache to support Movember.

The annual men’s health campaign raises money to battle things like prostate cancer and testicular cancer, but Joe says it was men’s mental health issues that got him involved this year.

He points out it’s a big deal in sports at the moment, saying, “I think a lot of athletes who finish contact sports are forgotten about and we see in North America cases of guys killing themselves and real mental health issues after taking lots of concussions”.

And he added: “We’ve seen old NHL players who’ve become addicted to painkillers and things like that, after a career of getting beaten up.”

But Joe says the moustache is also “a good laugh for the boys” and revealed “I was thinking I was perhaps going to try to grow one like Lt. Aldo Raine from Inglourious Basterds, but I don’t think I’ve got the artistic talent to shave it right.”

And once the month is over he’s very clear about the future of the moustache. “It’ll be gone” he says, “I don’t think the wife likes it very much!”

Joe also has some clear plans for his own future and is looking to become a qualified actuary.

He graduated with a maths degree in the summer and the move back to Telford fitted his plans nicely.

“I was looking for a student actuarial role” he explains, “and luckily I found one in Telford, so that was perfect really.”

The job, which involves measuring risk for businesses, will give him a long-term career “with a good work-life balance” and importantly, something to do when he ends his hockey career.

“I think that times coming soon if I’m honest,” the 32-year-old admits, with the demands of the job and professional exams likely to take up more of his time.

“Hockey’s been very good to me” he says, “I’ve had a 15-year career and obviously I’ll miss the sport, but you have got to think long-term and it definitely doesn’t last forever.”

There is still a chance to support Movember and men’s health, sponsor Joe at https://mobro.co/joemiller23 and donate.