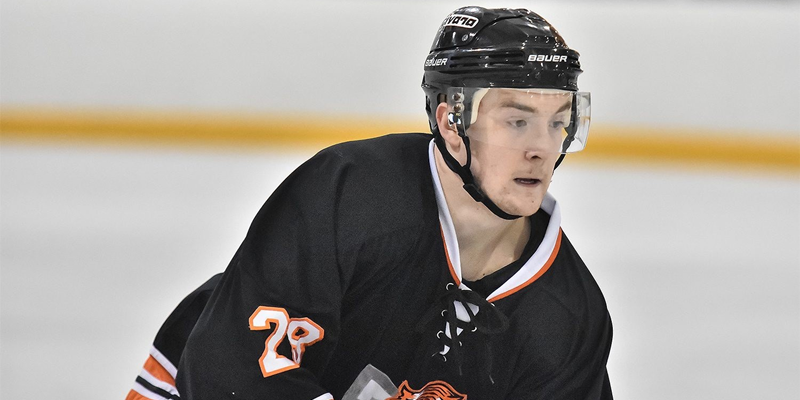 Telford Tigers 2 are delighted to announce the return of talented forward Joe Aston from division one side, Nottingham Lions. The 20 year old forward is a product of the Telford Junior Ice Hockey Club and re-joins his home team after starting the 2017-18 season with the Nottingham Lions, in which he picked up 12 points from 16 games, netting 4 goals and providing 6 assists. During the 2016-17 season, Joe was part of the Telford Tigers NIHL 1 team and managed to break into the Telford Tigers EPL team on a full time basis after an impressive start to the season.

Coach Bowley was pleased to see Joe return to Telford and said:

“I’m really pleased Joe wanted to come back to Telford after leaving for Nottingham, as he’s a player that will add even more of an offensive threat to our line-up. He’s a player that skates very well, competes every time he steps out on the ice and has a well rounded skill set. He will slot straight into our team and hit the ground running, as he knows what I expect from him as a coach so it’s a great signing for our team.”

Joe featured in both weekend fixture against the Blackburn Hawks and Altrincham Aces as Tigers 2 extended their unbeaten run to 4 games.