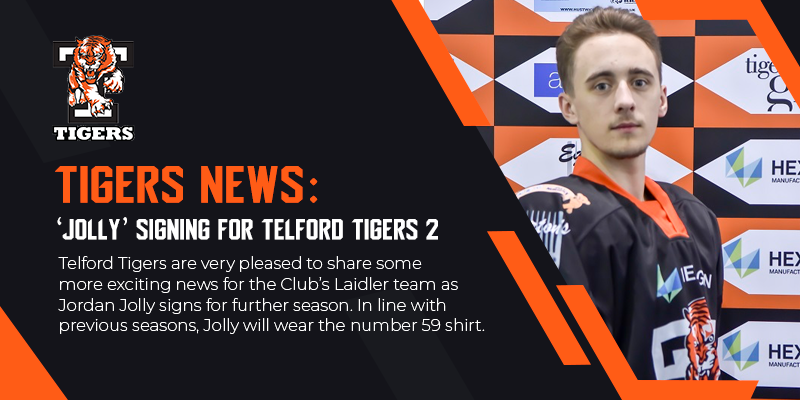 ‘Jolly’ signing for Telford Tigers 2. Telford Tigers are very pleased to share some more exciting news for the Club’s Laidler team as Jordan Jolly signs for further season. As with previous seasons, Jolly will wear the number 59 shirt.

The Telford born and bred forward has played hockey since 2013, where he first iced as a Junior Tiger in the under 16’s squad. Jolly then started to progress his way through the rankings where he found himself on the Tigers under 18’s roster before taking up the opportunity to sign for Deeside U20s and Solihull U20s before making a return to Telford for the 2017/18 season.

Jolly’s hockey portfolio has also seen the now 22-year old ice for the Midlands U17 squad back in 2015 and also for the Telford Tigers National squad on several occasions over the past few seasons.

The forward’s last season on the ice [before Covid-19] was the 2019/20 season, where Jolly bagged a whopping 30 points from 21 games. Also, during this season Jordan played an important role in the team’s leadership group as Assistant to former Captain Ben Washburn alongside fellow teammate Callum Griffin.

Telford Tigers 2 coaching team Scott McKenzie and Doug Wildman are delighted to have signed Jolly for the upcoming season, commenting:

“Great to have Jord back for this season. He had a good points tally last season and that possibly would have been more had he not had a serious injury half way through. We expect him to pick up where he finished and look to continue his progression as a player.”

Jordan is looking forward to returning to Telford Tigers commenting;

“Incredibly pleased to be back in a Tigers jersey for the upcoming season. After the long Covid break, it’s great to be back out on the ice with all the lads. We’ve got a good team set up this year with some top coaches in Scott and Doug and top players. Hopefully we can push for some silverware! Can’t wait to get the season going!”

Jordan’s own and loan shirts are available to order now for £75 each (Home and Away). Please see the Tigers’ Online Shop for details.