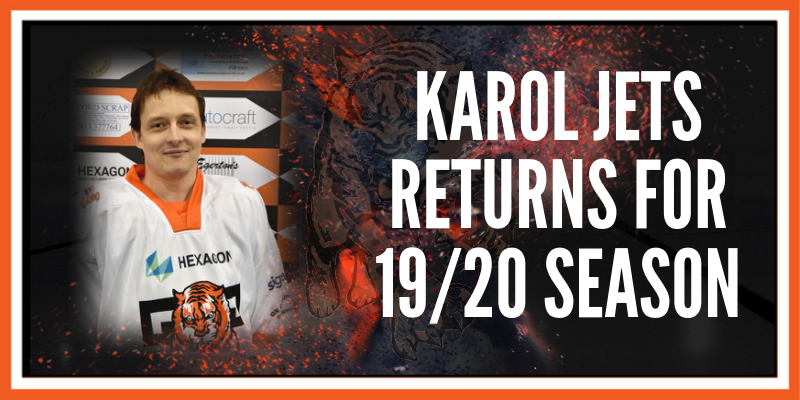 Karol Jets returns for 19/20 season! Following the recent appointment of Dave Fielder as Telford Tigers 2 coach, the club are pleased to announce the first singing of the fast-approaching season… We welcome back fan favourite, Karol Jets!

Karol’s long-awaited return comes after some months of recovery following an injury in play only two weeks into the 2018/19 season. Jets; who is renowned for finishing in the top rung of the players’ points table, iced for only 4 games last season before suffering his injury in Deeside last September.

The 38-year-old will be returning to Telford for a 14th season after first signing for the club back in 2005. Jets has iced with Tigers ever since 2005, with the exception of one season where he joined local rivals Solihull Barons for the season following his Tigers debut. After calling Hobs Moat Road home for a season, Jets made a swift return to wearing a Telford Jersey for the 2007/8 season.

Karol has been a key component in the Tigers rosters of the past few seasons, including the season just gone. Despite not making an appearance on the ice, Jets joined the bench staff giving support, advice and guidance to the rest of his teammates where he could.

Tigers 2 coach Dave Fielder is delighted with the first singing of the season commenting “I’ve known Karol for many years now, having played against him with him as well as coaching him before; I know he is a great team player and a fan favourite.”

Last season a nasty knee injury put him out for the season early, so he still has a long recovery but Karol has agreed to come back for the upcoming season. I’m hoping he will be back to full strength by Christmas, but in the meantime, he will be assisting me on the bench during practices and games.”

Previous seasons has seen the Slovakian rack up several goals and assists each game, with his most successful campaign seeing him bag 117 points in the 2017/18 season.

Karol is thrilled to be re-joining the roster this season saying, “I am really happy to be returning to the Tigers for another season. It was an easy decision to make to resign. The fans have always been great at Telford so let’s hope we can win some silverware this season.”

Karol’s own and loan shirts are available to order now for £75 each (Home and Away). Please see the Telford Tigers online shop for details including all of the sponsor opportunities for Karol.

In the 2019/20 season, Tigers are again offering individual player sponsorship at £200. The package will include a personalised ‘SPECIAL’ exclusive third jersey with a company name or family name patch, announcements on match nights, a small advert or logo in the match night programmes and a signed player photo.  The jersey will be worn for cup games and play-off games and will not be available as a replica.