Karol Jets returns to the ice for Tigers 2 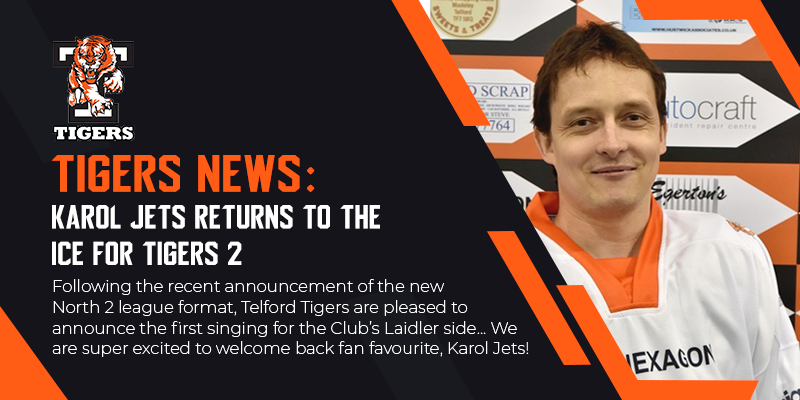 Karol Jets returns to the ice for Tigers 2! Following the recent announcement of the new North 2 league format, Telford Tigers are pleased to announce the first singing for the Club’s Laidler side… We are super excited to welcome back fan favourite, Karol Jets!

Karol’s long-awaited return comes after months of recovery following an injury in play only two weeks into the 2018/19 season followed by the non-starter season last year due to Covid. Jets, who is renowned for finishing in the top rung of the players’ points table, iced for only 4 games during the 2018/19 season before suffering an injury during an away fixture in Deeside.

The now 40-year-old will be returning to Telford for his 15th season after first signing for Telford Tigers back in 2005. Jets has iced in Telford ever since 2005, with the exception of one season where he joined local rivals Solihull Barons for the season following his Tigers debut. After calling Hobs Moat Road home for a season, Jets made a swift return to Telford for the 2007/8 season where he iced for the Tigers side for one season before joining the Telford Titans roster for six consecutive seasons, followed by the Tigers NIHL side for a further six successive seasons.

Karol has been a key component in several Tigers rosters over the years, including the last season when he iced. Despite not kitting up and skating, Jets joined the Telford Tigers 2 bench staff giving support, advice and guidance to the rest of his teammates where he could. Previous seasons have seen the Slovakian rack up several goals and assists each game, with his most successful campaign seeing him bag 117 points in the 2017/18 season.

Telford Tigers 2 coach Scott McKenzie is delighted with his first singing of the season commenting:

“We’re very happy that Karol has agreed to sign for another season. He brings lots of experience and skill and can read the game very well. We’re looking for Karol to bring his creativity and vision of play to the team this year and he will most certainly compliment his teammates creating openings and lots of goals.”

Karol is thrilled to be re-joining the roster this season saying:

“I am really happy to be re-signing for Telford Tigers for another season. I am sure we will have a competitive team. I am excited to get back on the ice with the team, after difficult last 18 months.”

Karol’s own and loan shirts are available to order now for £50 each (Home and Away). Please see the Tigers’ Online Shop for details.